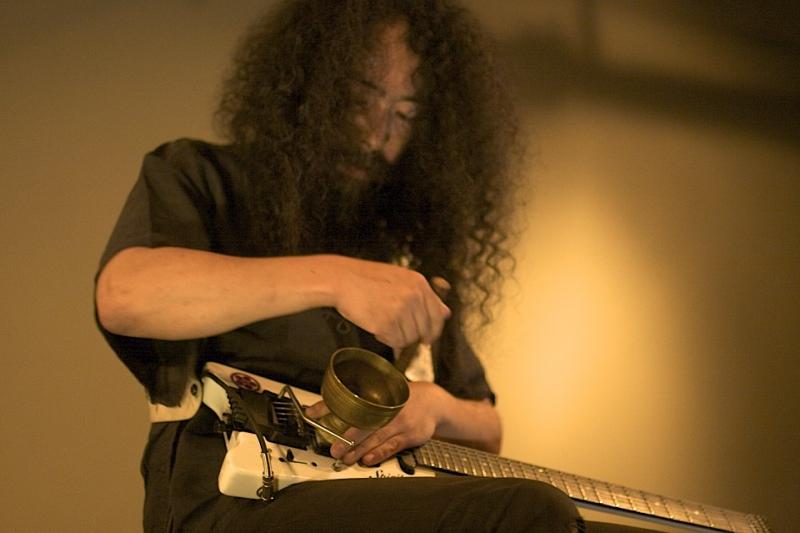 By JACK GOLD-MOLINA
June 9, 2013
Sign in to view read count
Hailing from Japan, Kawabata Makoto has been a leader in psychedelic rock and experimental music, and an active performer and solo artist since the late 1970s. Mostly famous as a founding member/guitarist for Acid Mothers Temple since the mid- 1990s, he has released literally dozens of albums—many on psychedelic-colored vinyl— and has done vital work with creative, experimental musicians and bands including Toho Sara, Tsurubami, Mainliner, Jean-François Pauvros, and German free jazz/experimental music drummer Mani Neumeier. The guitarist recently wound down the Space Resurrection Tour 2013 in the US and Canada with Acid Mothers Temple and the Melting Paraiso U.F.O., but is preparing to start another brief tour of Europe with unEVEN Eleven.

All About Jazz: What inspired you to start playing music?

Kawabata Makoto: When I was about 10 or 11 years old, I discovered [Karlheinz] Stockhausen's electric music and music concrete from the radio. I really liked this kind of music. It was similar to what was ringing in my ears for a long time. Also I discovered rock music like Zep [Led Zeppelin], Deep Purple, King Crimson, ELP [Emerson, Lake & Palmer] and Pink Floyd when I was 12 years old.

Then I had an idea. If these kinds of great rock groups played with a kind of electric music like Stockhausen, it would be even more great! But I couldn't find any bands like this, so I started playing music for my own ideas. I was 13 years old, in 1978, when I formed my first group, Ankoku Kakumei Kyodotai [Dark Revolution Collective], with two friends.

AAJ: You do a lot of touring, with Acid Mothers Temple or in solo or duet settings. Do you find performing solo or in a duet situation satisfying in the same way as playing with a group?

KM: Playing solo is really different from playing with somebody, even a duo or band. Playing solo is just your own inner space, playing with somebody is more like communication. It's a really normal thing. When I'm on the tour, I miss recording at my studio. But when I record at my studio, I miss the touring. My music comes from my cosmos, so I don't mind if I am on tour or not.

AAJ: How did Acid Mothers Temple come together, and what is the purpose of having more than one version of that group, like Melting Paraiso UFO or Cosmic Inferno?

KM: We were linked by fate. There are some concepts that are specifically for the name of Acid Mothers Temple, but then I don't want to play everything by just one band. It's like having the "right man in the right place." Why should we play everything in just one band? I want to play more, and then I want to choose the best musicians for each concept. So AMT is not a band, it is more like a fold.

AAJ: How do you go about staying creative as a musician? What inspires you to play?

KM: I believe I haven't created any music. Always, my cosmos teaches me what I should play. I don't need to be inspired by anybody. I just try to be the best radio tuner for my cosmic that gives me music all the time. I try to play with "self-annihilation." Any personal, egoistical idea makes the pure music. I have to play without any of my personality or my own ideas. So I've tried to be a better tuner to receive and replay— to recreate—this music for people. But if I add any of my ego—my personal ideas of this music—this pure music will be a different thing. For example, if a musician gets any new technique, they want to show it to other people. Then this musician tries to add this new technique to his music. But I believe music must be played without any musicians' egos. Music must be played as pure!

AAJ: Who are some other musicians and/or groups that you listen to currently?

KM: Many soundtracks of Japanese '70s TV dramas. These are not released on LP or CD, so I just listen to this music from my video collection. I'm very interested in soundtracks, because they aren't completed, only music. They're completed with the images and film footage.

AAJ: What do you suggest for people who aspire to be great musicians?

KM: Just listen more and more, because people want to play instruments before listening. If you listen more, you can know what you should play. This is the music. Always, music teaches what musicians should play. Listen to the music from your cosmos, and play without your vanity.