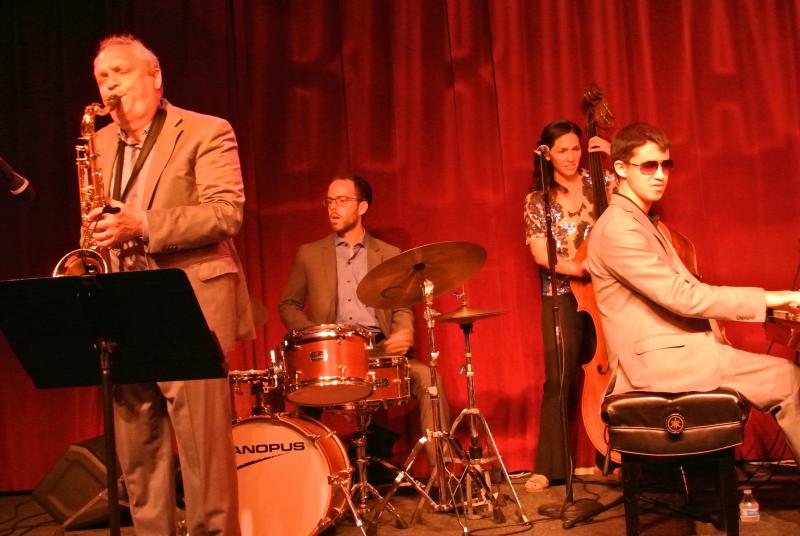 Joy swings eternal in the music of bassist-vocalist Katie Thiroux. And that's just one of the many gifts that spring forth from this skyrocketing talent. Over the past eighteen months, Thiroux has had one deserved success after another. It started with the arrival of one of the most auspicious debuts in recent memory—the Jeff Hamilton-produced Introducing Katie Thiroux (Basskat Records, 2015)—and snowballed from there. She appeared on notable records from the likes of flautist Lori Bell and pianist Mike Jones, wowed the jazz press with shows in support of her debut, was one of twelve semifinalists selected to take part in the Thelonious Monk Institute International Jazz Voice Competition, and toured in a hard swinging trio with pianist Larry Fuller. That's just the highlight reel, but it gets the point across. Thiroux has quickly found her place and her footing in the jazz world, and audiences and critics have taken notice. Why else would she be at Birdland at such an early stage in her career?

While tens of thousands of people took to the streets to take part in the New York City Marathon earlier in the day on this most temperate of Sundays, the pace and crowds had slackened by early evening, returning to what passes for normal in New York. That's when Thiroux and her bandmates—multi-reedist Ken Peplowski, pianist Justin Kauflin, and drummer Matt Witek—took to the Birdland stage for a single sublime set of music. After spending the previous night playing at Pennsylvania's Deer Head Inn, all parties were primed and ready to go for this one.

As the band settled in, Peplowski's tenor took the lead for "I've Never Been In Love Before." It was a pleasing opener with a sanguine swing feel and a driven tenor solo that upped the energy without altering the comfort level of the performance. Thiroux's voice then came to the fore on "I'm Old Fashioned," the first of many numbers to feature her dual talents. She rightly drew focus on that piece, but Witek's impeccable and articulate brushes provided ear-catching backing and scene-stealing soloing. From there the group moved on to "A Beautiful Friendship" and reveled in the delivery of complex lines and gleefully traded solos during a trip through Oscar Pettiford's "Tricotism." Both were strong showings, but none could match what followed—a solo bass-and-voice performance of "Willow Weep For Me." Thiroux was simply mesmerizing, creating a slow and funky groove with her pizzicato work and bass body slaps while blending directness and sultriness in her vocals. The heat in the room seemed to rise each time she slowly and skillfully bent her voice up to settle back into pitch-perfect place.

The band joined back in after that solo standout, bringing beauty and sensitivity with it. Duke Ellington's "I Got It Bad (And That Ain't Good)" found Peplowski's tenor in its most tender-hearted state, with breathy subtone allure and a tasteful solo capped off with breathtaking tremolos. Peplowski left the stage for a spell after that, leaving the core trio to perform Benny Carter's "When Lights Are Low." It's a piece that's slated to appear on Thiroux's soon-to-be-recorded sophomore date, and Kauflin had his way on it. A pair of numbers inspired by Ray Brown-centric discussions between Thiroux and Hamilton followed. "Oh What A Beautiful Morning," a solo bass number recorded at the behest of the drummer-producer for the aforementioned debut, segued into an original blues dubbed "Ray's Kicks." After that winning pairing, Peplowski returned to the bandstand to help finish things off with his clarinet. A sensitive duet with Thiroux on the Frank Sinatra-associated "When The Wind Was Green" held the penultimate position in the set, but it was full steam ahead for the show-ending "Ray's Idea."

While the tides logically ebbed and flowed throughout this ninety-plus minute set, Thiroux's exuberance and passion never receded. She remained in good spirits throughout, whether trading humorous barbs and complements with Peplowski, telling tales with her bass, seducing with her spellbinding voice, sharing stories with the audience, or laying down a wide walking beat. Genuine artists like this don't come along everyday, so take note. This writer is doubling down on Katie Thiroux, and many others are likely to do the same once they see her in action.