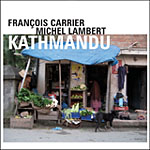 Alto saxophonist Francois Carrier is one of the most open musical souls around. When he went to Nepal in October of 2006 with his long-time musical partner, drummer Michel Lambert, to play in the fifth Jazzmandu jazz festival there, the depth of the connection he immediately felt with the Nepali people overwhelmed him. Kathmandu is the result of that encounter, and his emotions can be readily heard in the music.

The group was supposed to be a trio, but one musician could not make it. After a grueling thirty-hour trip, the duo played music for a very appreciative Nepali crowd, despite the fact that jazz—and especially this freely improvised variety, is something that is not part of the normal musical scene.

Carrier and Lambert played together in two separate concerts that are recorded here, they also performed separately and privately with some Nepali musicians. They played their music with no compromise, judging (correctly, as it turns out) that the emotional content of their music could and would be heard, despite its mostly arrhythmic and non-harmonic nature.

Carrier is an extremely open musician who plays in a style that might be called "freely melodic," meaning that while his individual phrases are rhythmically free, they are connected to one another and sound tonal, if not harmonic. He uses very little of the squeals and other sounds commonly associated free playing, bringing them in for a bit of emphasis or to actually imply sounds of nature as in "Monkeys On The Green."

The music's lyrical quality is sustained by Carrier's constantly varied tone and dynamics, which are combined with the repetition and development of his phrases. The spontaneously twisting and turning line continually teases the listener, because it always verges on dropping into the immediately understandable, as a rhythmic pulse appears or a melodic phrase is reiterated, but not carried through. When a pulse is maintained or a phrase repeated, as in "Prayer For Peace," it really stands out. Carrier's magic is in this process of producing an unfolding music that carries the listener along by its internal logic, allowing its emotional depth and directness to come to the fore.

Lambert, who has been playing with Carrier for years, is very important to the overall sound. The connection between the musicians is very strong. Not only does he respond instantly to Carrier, he also pushes and pulls him with his melodic drumming to explore a musical area of his choosing. The two are really one and while Carrier's saxophone is naturally heard in the lead, when one also brings Lambert to the front, the true depth of their in-the-moment creation becomes apparent. Kathmandu is a compelling musical document and since Carrier is exposed, truly shows his creativity. It makes a fine addition to Carrier's discography which includes Noh (Ayler, 2007), Open Spaces (Spool, 2006) and Happening (Leo, 2005).

White Summit; Dancing Light; Joyfulness And Playfulness; Prayer For Peace; Himalayan Beauty; Monkeys On The Green; Impro For The Monks; Namaste; The Silence Of The Bells; Buddha's Homeplace; Candle In The Temple; Amarawati Garden.