By DAN BILAWSKY
February 9, 2013
Sign in to view read count 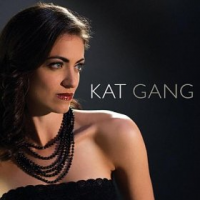 Vocalist Kat Gang must have been thinking of the old show business adage, "always leave them wanting more," when she conceived of and recorded this four-song EP; this sub-sixteen-minute musical appetizer whets the appetite, as Gang inhabits each song with a world-wise voice and delivery, and certainly leaves room for a larger portion to fill the void.

The Boston-born, New York-based Gang lives a double life as actress and singer, but both of those worlds converge here. Gang understands that singing isn't just about accurate pitch, pleasant timbre and memorized lyrics; singing is about living within the meaning and circumstances of a song and that's where her dual talents serve her best. She has clarity and focus in her delivery, understands the intentions of the writers and makes it all sound easy, despite the fact that it's clearly not.

Gang's partner on this abbreviated journey is pianist Tedd Firth, who has no shortage of experience in this particular environment. His credits include work with singers like Hilary Kole, Brian Stokes Mitchell, Joan Crowe, Maureen McGovern and Tony DeSare, to name just a few. He's been firmly ensconced in the "singer's pianist" category for quite some time and helps magnify the supper club suggestions in Gang's voice through his own tasteful playing. Together, they take an appropriately measured approach through "Say It," "How Sweet You Are" and "Something To Remember You By." Irving Berlin's "The Best Thing For You" proves to be the only number with some spring in its step. Firth keeps things lively, while Gang scats in unison with his piano lines and makes a convincing argument with the song's lyrics.

It's unclear whether brevity here is born out of artistic intentions, time constraints, financial concerns or other matters, but 'tis better to appreciate what's here than to dwell on what's not..

Say It; How Sweet You Are; The Best Thing For You Is Me; Something To Remember You By.