By GLENN ASTARITA
March 1, 2001
Sign in to view read count 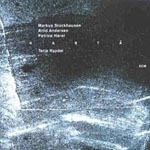 Trumpeter Markus Stockhausen (son of contemporary composer Karlheinz Stockhausen), bassist Arlid Anderson and percussionist/live electronics performer Patrice Heral have been touring as a unit since 1998. However, at the behest of ECM producer Manfred Eicher, the inestimable Norwegian electric guitarist Terje Rypdal joins the trio for the inaugural Karta, which is Sanskrit for "higher power," as the musicians do, indeed, perform with an elevated sense of vitality.

The quartet executes multihued tonalities in concert with exasperating soloing and cavernous regions of sound as the omnipresent and signature ECM audio qualities, prevail throughout.

The band launches this affair with the ethereal mood-evoking "Sezopen," which boasts a series of abstract arrangements brimming with extended notes and fragile motifs. Here, the musicians elicit imagery of perhaps traversing through a dimly lit ancient ruin, in search of an ever elusive treasure.

Stockhausen is a master at perpetuating haunting themes in conjunction with majestic statements, while also fully adept at turning up the heat when called upon. With the group composition "Sway," Rypdal's cagey lines, rapid chord progressions and harmonics mesh quite well with the trumpeter's soaring skyward approach. The ensemble pursues mystical or dream-laden vistas amid Rypdal's frenzied leads on "Auma," whereas the rambunctious burner "Wild Cat" features an assortment of scorching statements and the rhythm section's maddening yet sinuous pulse.

Otherwise, this somewhat mercurial journey is consummated via sweet tempered lyricism, whimsical passages and an upbeat groove. On "Lighthouse," the music expands, contracts and oscillates, as though some underlying spiritual forces were guiding the overall presentation.