Kansas City Lightning: The Rise and Times of Charlie Parker 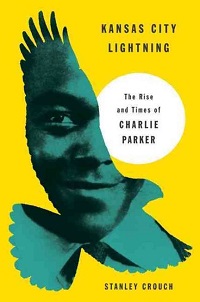 Ross Russell, in the cover blurb of his biography of jazz saxophonist Charlie Parker Bird Lives—The High Life and hard Times of Charlie "Yardbird" Parker (Quartet Books, 1973), asks "Why should a white man tell this story?" and proceeds to state the obvious: "Firstly, because [as Ross Russell points out] no black man has done it yet." Now, after nearly 30 years of threatening to do so, columnist and social critic Stanley Crouch has delivered the first half of his two-part biography of Parker, Kansas City Lightning: The Rise and Times of Charlie Parker, thereby flipping Russell a well- deserved bird...pardon the pun.

Crouch, New York Daily News columnist, jazz expert and cultural critic, is best known for his collections Considering Genius: Writings on Jazz (Basic Civitas Books, 2009) and Notes of a Hanging Judge: Essays and Reviews, 1979- 1989 (Oxford University Press, 1990), proves to be no kind of standard biography. Rather, Crouch casts a well-worn story, many times told, within the frame of an exhaustively-researched social history of Black America surrounding World War II. Add to the the cult of personality that surrounds Crouch's writing, making this biography as much a vehicle for that writing as for telling the story of America's great 20th Century composer.

Not that this is bad in any way. Crouch is as much a biographer of Parker as Nick Tosches, another enigmatic culture writer, is of Jerry Lee Lewis in Hellfire (Grove Press, 2002), and that biography is a most festive read. Both men speak with their own singular voice and add their own mirepoix of expertise, knowledge and raconteur spirit to the stories they tell. Likewise, Crouch's biography has more in common with Russell's based on the narrative, story-telling quality of each. Both men spend much time setting a stage, a mood, and a perspective in which to place Parker when telling his story. While, Crouch's story, as would be expected, is more sympathetic and empathetic than Russell's, neither biography replaces the other, each offering their own important perspectives.

This is amply illustrated in the opens of both books, where Russell and Crouch each sharpen their respective lenses on a Charlie Parker in full flight. Russell begins his biography with an account of Parker's opening night at Billy Berg's Jazz Club, 1356 North Vine Street in Hollywood. Parker is debuting as part of the Dizzy Gillespie Quintet, who were in residence at the club from December 10, 1945 through February 4, 1946. This was the West Coast's much anticipated introduction to New York City's be bop jazz. The scene opens with a self-indulgent Parker eating two complete Mexican dinners and drinking the better part of a fifth of gin as he cheerfully carries on with Dean Benedetti, the wait staff before Berg himself, finally encourages Parker to do his job and go out and play.

Colorfully presented, to be sure, Russell, nevertheless, writes as a modern jazz church father from the perspective of one who had professional dealings with Parker, dealings that did not end well for either party. It was on this West Coast junket that Parker decided to stay after the rest of the quintet returned to New York City, cashing in his ticket home for heroin. Parker dissipated and become strung out on bad dope during this period, resulting in his six-month stay in California's Camarillo State Mental Hospital. This story is told dispassionately by Russell with an emphasis on Parker's progressive and profligate slide into dissolution.

In contrast, Crouch begins his story with a slightly younger Parker, then a member of Jay McShann's Big Band in 1941, as it embarked on a stay at the Savoy Ballroom opposite Lucky Millinder's Big Band. A competition between the bands was highlight with Millinder's group portrayed as suave big-city musicians while McShann's band is depicted as hillbilly "western dogs" from the middle of nowhere. McShann brought in his raggedy band, blowing Millinder off the stage. The narrative surrounding this event is scintillating and spark filled. Crouch has always been able to turn a phrase in his own sweet way and he fills his bandstand descriptions with such.

Further, what Crouch provides is a dense and terrible level of dignity to Parker's story. There are no lurid or prurient descriptions here, only neutral, accurate characterizations told within a historical framework. Lacking is any shred of Romanticism of the like found in Robert Palmer's superb tome of the American South, Deep Blues (Viking, 1995). Chet Baker biographer Matthew Ruddick achieved the same descriptive balance as Crouch in his Funny Valentine—The Story of Chet Baker (Melrose Books, 2012), offering a neutral center between James Gavin's fine but cutting Deep In A Dream— The Long Night of Chet Baker (Alfred A. Knoph, 2002) and Jeroen de Valk's informative Chet Baker—His Life and Music (Berkeley Hills Books, 2000).

However, Crouch spares no one when describing the rampant racism of the period, but he does so in as balanced and even- handed way as this history deserves. He pulls no punches when framing this story with Jim Crow America. This, coupled with Crouch's exceptional humanizing of Parker make the biography that much more compelling and real. What previous Parker biographies have lacked is a three dimensional picture of the artist, a fate suffered by the blues singer Robert Johnson, who, unlike Parker, is still awaiting his proper biography.

This first half of Crouch's portrait of Parker leaves off with the artist in 1940 just after abandoning his first wife, Rebecca Ruffins, and just before the vignette that opens the biography. Parker has yet to fully develop and make his seminal recordings that would change the face of jazz. Let's hope that Crouch gets the rest of the story written before another 30 years pass.