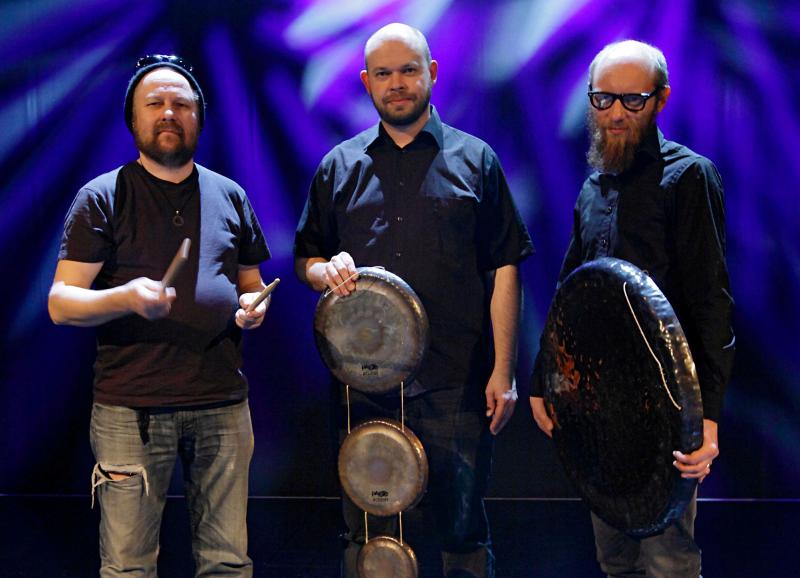 In spring 1973 the Prince of Psychedelia, Daevid Allen, invited his adulatory and, quite likely, addlepated audience to follow his band Gong as they ventured on their journey "Down the Oily Way," a euphemism for a trip as mystical as it was musical. In spring 2012 the diminutive and somber looking Mika Kallio invited his audience to follow him and his trio—and a plethora of gongs—along an equally variegated and often even more humorous path than any 1970s psychedelic musician could have imagined.

With his modest stature and bald pate, Kallio bears as little resemblance to Allen physiologically as one could imagine. He is known in his homeland as a percussionist with a preference for the abstract, if not the arcane, popping up alongside contemporary and established artists from Mika Innanen to Otto Donner, but is similar to Allen in his clear preference for the eclectic and experimental. With the trio Kallio Slaaki (roughly translated as Kallio's Clout) he also incorporates the same sense of absolutely dedicated fun that earned the shambling, surrealistically attired Gong collective their reputation 40 years earlier. Kallio aims for a similar sense of humorous detachment from the burdens of the everyday world and achieves it with the help of only two associates—both percussionists, and both male, too.

Their concert in the Helsinki suburb of Kannelmäki attracted a broad swathe of listeners— from the typical grey-bearded aficionados, to a handful of pre-teens inspired by parents to witness a greater quantity of drumming than they could expect at the heaviest of rock or metal gigs. Admittedly, there were some begrudging whispers, but the evening flowed with a range of music, from the ultimately sublime to that surfeit of rhythm the youngsters had hoped for. Apart from the one cover of the evening, Pierre Favre's "Prism," Kallio's role as composer and conductor was clear, leading melodic lines with his array of over 20 tuned musical gongs, flagging changes with colored cue cards and semaphore-like waves of his bow, like a bedraggled baton. Within this triad of percussive males, Kallio plays a slightly nerdish role, often in the shadow of his two more conventionally inclined, and archetypically-muscled colleagues. Opposite him and behind his own full kit sat the tall, sturdy figure of Mikko Hassinen, equipped with a similar array of high hats and cymbals, as well as a row of well-weathered tubular bells. Like his leader, Hassinen has also played with many in the Finnish nu-jazz scene, as well as holding a permanent position in Finland's best big band, the UMO Orchestra.

However, central to the earnestness to the left and the force to the right, countering Kallio's gnomic patterning and rattling, was the compact and excellently expressive style of performance from Anssi Nykänen. With a background rooted more in rock or pop than either other drummer, Nykänen played with equal concentration, eyes shut and head thrown back, and with much more expression of obvious pleasure. Behind a bass drum twice the diameter of Kallio's, his kit was the simplest of the three but was played with more humor than the others' combined. This is not to decry the intention or performance of the others at all, since it was the mixed seriousness of intent and lightness of execution that made this evening of pure percussion such a pleasure to experience.

The majority of pieces relied heavily on Kallio's array of over 20 tuned Gamelan-styled gongs, as he picked out lines of melody but repeatedly threw back hooks or lines of rhythm that integrated the pieces into their separate identities. There was much build and release, crescendo and diminuendo, but overriding all was a sense of humor that meant anything could be expected—resounding rolls, sudden non-rhythmic stabs and shocks, as well as some all-but-inaudible air-whisking with Nykänen's flashing wire brushes. And as with any spectacle or circus show, all was performed with an intensity and a great sense of fun.