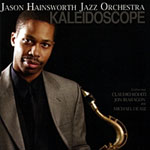 Hainsworth's Florida State University colleague, Michael Dease, now a New Yorker, decided to collaborate on this album, serving as producer and playing lead trombone. Among the many New York musicians joining in on this session are fellow Dease colleague, altoist Sharel Cassity and tenor saxophonist Jon Irabagon, who makes his only appearance on Hainsworth's "It's Right There." The special guests listing rounds out with Brazilian rotary-valve trumpet master Claudio Roditi, who dices the music with a magical performance.

With only seven pieces gracing this album, Hainsworth makes the most of his vibrant arrangements, launching his debut with a slight Samba-shaded rendition of Cole Porter's "I Concentrate On You," featuring Cassity's voice on alto followed by, as liner notes author Dr. Robert Morgan so astutely points out, an "a cappella ensemble half-chorus," for a nice twist. On "It's Right There," Hainsworth pens what at first appears to be a light ballad and perfect vehicle for Roditi's delicate touch, but in turn develops into a very nice orchestration propelled by a superb performance from Irabagon.

Dease takes center stage on the Heyman/Young standard "When I Fall In Love," laying down lovely trombone lines and supported by the very able brass and woodwinds sections. An unselfish leader, Hainsworth does not solo until the Schwartz standard "Alone Together," perhaps the standout piece of the album that also includes another Roditi blast and a fine appearance from pianist Roger Lent. Hainsworth's "Marcilienne" claims a close second for best tune on the recording; one deliciously warm and inviting ballad, featuring the leader on his only other solo appearance, providing a gentle, breezy performance accompanied later by a Dease tease on the bone.

Other than Roditi, the only other trumpeter to provide a lead role is Thomas Barber, who guides the band on the splendid jazz waltz "Matriarch," while Hainsworth's bluesy finale, "Something Stolen, Something Blue," features an array of soloist which, with the exception of the pianist, centers on showcasing the reed section and a bass trombonist—all capping off one riveting session of big band jazz.

By dictionary definition Kaleidoscope can mean "an instrument which, by means of a mirror, reflects beautiful colors and symmetrical forms," or "a changing or complex design or scene." By any definition, the auspicious debut of Jason Hainsworth's changing and creatively complex big band arrangements reflects an audacious and colorful musical statement that clearly augers well for this promising artist.

Track Listing: I Concentrate On You; It's Right There; When I Fall In Love; Alone Together; Matriarch; Marcilienne; Something Stolen, Something Blue;