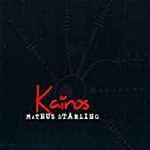 Fresh out of Boston's Berkelee College of Music in 2008, Brazilian guitarist Mateus Starling presents Kairos and boldly abandons following in the typical footprints of jazz canons to pursue his own path. With highly developed chops sharpened in varied settings (TV broadcasts/jingles, jazz, rock, gospel, ethnic music), this debut charts Starling and a band of his peers (talented members from Brazil, the United States and Chile) in a live studio setting.

An unadulterated performance of eclectic jazz-rock-funk in a grungy jam-band stew, the music sets forth with eight tracks that sound more like Marc Ribot's experimentalism than what might be expected from the calmer rhythmic shores of Cabo Frio in Rio de Janeiro, where Starling was born.

The mix includes the dirty funk backbone of "Exodus," a slow grinder that moves into free jazz with Starlings' hyper-mode guitar and saxophonist Jesse Scheinin's acerbic reeds, supported in good stead by Chris Cabrera (bass) and Pablo Eluchan (drums). Next in line comes the very hip "Good Moments," stamped by a wah-wah riff and elongated sax lines, then later "Jericho," a distant and unruly cousin of swing, with dicey unison lines and stand out solos from Starling and Cabrera.

As striking as Starling performs (both technically and creatively), this is a complete group effort. On the irregular-metered "Brazilian Funk," Scheinin shows off with some soulful playing while Eluchan's provides the exciting battery. Another underscore is "Guerreiro," marked by its funky bass thread, psychotic guitar and horn shouts; it grooves very hard and everyone shines.

Throw in a pleasant but somewhat awkward ballad in "Pai," the impressive Brazilian flavored "Pacoca" where Starling artfully shows his roots, and the hallucinogenic dream of "The Ark" and this debut uncovers a very promising guitarist who thankfully can deliver without having to sound like everyone else.