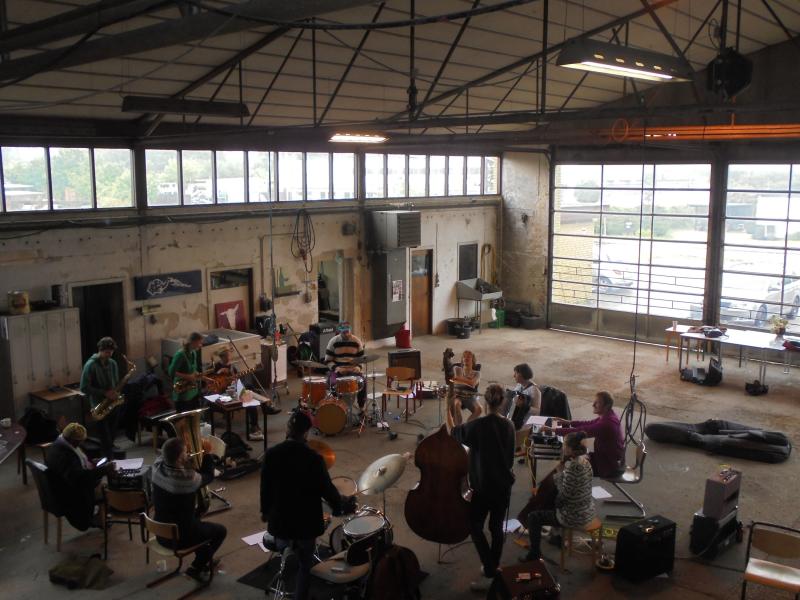 Where do you find some of the greatest improvisers in music today? The answer, in a folk high school in the middle of a forest near a small Danish town called Jyderup, seems like a bad joke. Nevertheless, it is the truth -at least these days where a meeting of improvisers is taking place in an unlikely, but beautiful setting. It is an encounter between students and teachers, old and young, but it also a special chance for kindred spirits to get together and share musical thoughts and ideas and enjoy each other's company.

The man behind it all is the Danish drummer Kresten Osgood, who has gathered an awe-inspiring list of master improvisers for a musical summit called Jyderup Accordeon Traef. It is the third time the meeting is taking place and this year the list of teachers included bassist William Parker, saxophonists Akira Sakata and Bennie Maupin, bassist and keyboard-player Alan Silva, violinist LaDonna Smith, drummer Josef Klammer and guitarists Davey Williams and Seppo Gründler. It is a diverse setup with many different aesthetic sensibilities, but the musicians all share a love of improvisation and music in general.

Openness is a keyword when it comes to this 7-day course from June 14-21. People, whether they are young musicians or experienced improvisers, are here to learn and be challenged. Osgood has a holistic approach when it comes to the experience of art and the people who attend the course are not only exposed to lots of strange and wonderful music, but also lectures in all possible areas, from poetry readings and the noble art of calligraphy to Akira Sakata giving a lecture on Brackish-water Amphipod Gammarus.

The greatest lessons come from the musicians and Akira Sakata is not only able to tell his students about Amphipod Gammarus, but also has important knowledge to pass on to the group of musicians he is teaching. He tells how it is important to reach what he calls a marathon high, a state of ecstasy in improvisation. To get there, it is crucial to let go of feelings of right and wrong, every emotion is acceptable. His group plays music that changes between noisy explosions and subdued moments. At one point, he tells the young drummer to play a solo. After the solo, he tells him to play faster, but he senses that the drummer does not let go completely and tells him and the rest of the group about the importance of surrendering to the moment without any type of emotional and intellectual restriction. Music is a gift from above and we need to recognize this and accept the gift without hesitation.

The spiritual element that is present in Akira Sakata's musical philosophy is also clearly felt in bassist William Parker's music. He has not brought any music with him beforehand, but has composed a piece on the spot that fits the musicians at hand, including two drummers. The music is a suite, divided into four parts, with many musical layers that give the musicians a great deal of freedom. On the other hand, there is also a clear structure with gradual introduction of instruments and use of dirges and drones. There is a rhythmical ebb and flow where Parker has an ear for every detail, for instance, he suggests that the tuba puts an accent on a bass line that carries a groove in the second part of the suite. At one point, he plays flute, but mostly he directs his energy towards the young musicians and listens to what is happening. He prefers to avoid conducting, but is ready to give cues when the energy is not there.

After the rehearsal, a large portion of the young musicians gather around him and he talks with them about music, female jazz musicians, the role of subsidiary in Scandinavian countries and the nature of improvisation. Improvisation is something everyone can learn, a child intuitively starts finger- painting without any preconceived notion of art. Parker talks about finding the right key to play in, the one that fits with the inner energy of the individual and the fact that many people can play music, but not the same music. He relates it to the difference in musical cultures and the need for respect for other musical traditions.

In another room, Bennie Maupin is teaching his students about the importance of the sound level. They are working on a piece with many reed-players and Maupin wants the students to be aware of the dramaturgy of sound. How is it possible to create tension and development if you start out from the highest level of energy? Maupin makes the students aware of this relevant question.

Interesting musical questions are considered everywhere. According to the students, Ladonna Smith brings an element of performativity to the way she teaches music while Alan Silva considers the relationship between sound and image and has a large projector in his room.

Most of the workshops take place inside the school building, but William Parker's workshop is in an old garage and Josef Klammer and Seppo Gründler are conducting strange sound experiments in a tent outside the building.

Every evening, something special is going on, mostly a concert with some of the teachers, but the highlight of the course is when all the teachers are gathered to play a special concert to the students. This year was no exception and it was mind-blowing to hear the musicians engage in an intense musical dialogue. Guitars were scratched, drums banged and the keyboard landed from outer space while the horns blew with wild joy. Ladonna Smith walked around on the scene with her violin, listening to the others while she played. At one point, her black hair was standing up is if it was caught by the electricity of the music. Parker occasionally provided an earthbound groove on the bass and at one point the group played a strange kind of broken funk music. Parker also recited poetry dedicated to the saxophonist and singer Arthur Doyle.

The concert ended with a climax referred to by one of the students as "a rocket" and then Osgood announced that the rest of night would be open for jam sessions and so they played while the oil of the midnight lamp was burning. Improvising musicians playing with the fire of John Coltrane deep into the night.