By ERNEST BARTELDES
November 6, 2010
Sign in to view read count 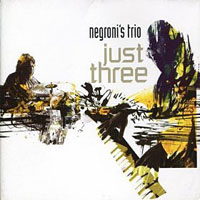 On its fifth release, the Miami-based Latin jazz trio led by Puerto Rican-born pianist Jose Negroni continues to explore its various influences, which go from straight-ahead to Caribbean beats, with classically-inspired moments. The disc opens with the rumba-inflected "Fingers," a fast-paced tune that features Negroni on electric piano. The chemistry between the bandleader and his gifted son, drummer Nomar Negroni, is evident here, as the younger Negroni responds to each of his father's grooves with carefully placed accents that enhance each note. The same can be said about "Emotions," a tune with more of a straight-ahead feel with an arrangement built around Marco Panascia's walking bass and a killer samba-infused middle section.

The more down-tempo title track has something of a classical feel, featuring Panascia playing mostly with a bow. Panascia also contributes an accomplished finger-picked solo, which is followed by equally dexterous individual moments by the two Negronis. The pianist plays mostly solo on the beautiful "Preludio en La Noche," an enticing tune that shifts tempos and textures, beginning with a soft melody that grows into a more up-tempo beat and then goes into a Chopin-inspired groove. The percussion appears only occasionally, accenting the tune's heavier moments. Without interruption, the group joins the leader on "Sabado en La Noche," which follows mostly the same melodic approach but with more of a bluesy feel.

"Bailando La Rumba" is a percussion-rich tune that, again, features the bandleader on electric piano. As the Spanish-language title (which translates as "Dancing the Rumba") suggests, the beat has a danceable feel within a jazz format. The group seems to take a festive approach on it, no doubt a real high point in performance.