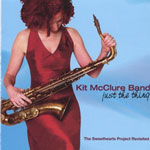 Just the Thing is Part Two of the Kit McClure Band's warmhearted salute to the International Sweethearts of Rhythm, a groundbreaking all-woman ensemble that came out of a school for poor black children in Piney Woods, Mississippi, to become one of the most widely successful and admired big bands of the World War II era. Whereas Part One was devoted for the most part to faithful transcriptions of original charts played by the Sweethearts, this second component consists of updated arrangements of those same charts, flavored with hip-hop, funk and salsa, presumably denoting the way the Sweethearts would be playing them today. As the Sweethearts are no longer with us, no one can reasonably argue the point.

The first ten selections on Part 2 are the same as on Part 1 (although not in the same order), with Juan Tizol's "Perdido, the last track on the earlier album, replaced on this one by the clunky "NYC Rap, which, as one would expect, suffers by comparison (in other words, they don't write 'em like they used to). McClure had a hand in arranging and reupholstering every number, helped at times by pianist Cathy Harley, bassists Kim Clarke and Nicki Parrott, drummers Barbara Merjan, Bernice Brooks, Lakecia Benjamin and L. Olivia Sci, trombonist Britta Langsjoen and composer/arranger Maurice King who had written five of the tunes for the Sweethearts themselves. It's a sincere and interesting endeavor but as a rule lacks the vitality and enthusiasm of Part 1, which was a tad more straight-ahead and swinging.

Several numbers—"Vi Vigor, "Just the Thing, Don't Get It Twisted, "She's Crazy with the Heat, Basie's "One O'Clock Jump, a more laid-back version of Fats Waller's "Honeysuckle Rose —are neat and handsome in their new clothing, while others don't fare quite as well. In that respect it's a split decision, one that rests in part on one's penchant for classic swing vs. cool and modern. Two selections—"Jump Children and "I Never Get Tired —were enhanced on the earlier session by one of the original Sweethearts, guitarist/vocalist Carline Ray, who's absent this time.

Part Two's most explicit advantage lies in the playing time, 51:36 as opposed to the first album's meager 34:27. That gives the soloists more room to stretch, and McClure, Harley and the others make the most of it. Trumpeter Tanya Darby contributes a number of animated solos, as do drummer Benjamin (especially on "Vi Vigor ) and saxophonists Tia Fuller and Erica Von Kliest.

While I'd give a narrow edge to Part One of The Sweethearts Project for overall charm and pleasure, Part Two has much to offer in its own right and is easily recommended.