By EDWARD BLANCO
October 2, 2011
Sign in to view read count 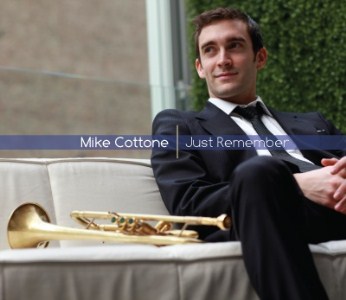 Just Remember is the timely debut from Mike Cottone, reflecting the young New York-based trumpeter's musical journey thus far and paying tribute to a pivotal figure in his career, Daniel McMurray, his late high school band director and mentor. Drummer Ulysses Owens, Jr., who performs on several pieces, co-produces the project with Marc Iacona of the Rochester International Jazz Festival. The album serves as both a tribute to McMurray and a remembrance of all those who played a part in realizing this first recording, thus inspiring its title.

Early on in his development, Cottone was exposed to and—ultimately, influenced by—the music of legendary trumpeters Clifford Brown, Lee Morgan, Roy Hargrove and the incomparable Miles Davis. He has since created a soulful sound of his own, seemingly blending Brown's stylistic depth and tenderness ("When Sunny Gets Blue," "Stardust")—with the enthusiasm of Morgan's hard bop pedigree ("Dear John" and other tracks).

Except for the seasoned Owens Jr., Cottone teams up with what he terms "a dream band of my best musician friends," essentially a quintet of local players who perform here with the musicianship qualities of veteran jazz luminaries. From the opening blast of the title piece to the soft and tender pace of Hoagy Carmichael's "Stardust," the band delivers superb support. Pianist Kris Bowers contributes "Selah," a sophisticated piece on which both the pianist and Owens Jr. turn in wonderful performances. The trumpeter and tenor saxophonist Jeremy Viner combine for some bright moments on "Old Blue," as they also do on the sizzling "Gyroscope."

The bluesy "Sloppin'" provides some of the trumpeter's best solo phrasings yet, while on the stylish "I'm Sure," his dynamite work draws comparison to the great Clifford Brown. Laying down a fine tribute to his mentor and others who have lent a hand throughout his so-far-brief career, Cottone has created a recording that will surely make them all proud. Just Remember is the kind of start which artists should strive for to begin a musical résumé, and Cottone and band do exactly that, making certain that this debut is not easily forgotten.