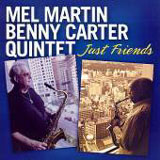 Saxophonist Mel Martin, the lesser known half of this clever musical equation, first met the legendary Benny Carter in 1987 and played alongside him for the first time three years later. This quintet date, recorded live at Yoshi's nightclub in Oakland in April 1994, as Carter was nearing his eighty-seventh birthday, shows why he was able to span so easily the eras from swing to bop and beyond and assimilate their changes. His perspective was firmly rooted in the tradition even as he espoused fresh ideas and made them a part of his singularly wide-ranging style.

Carter and Martin remained close friends until Carter's passing in July 2003, less than a month before his ninety-sixth birthday, and their camaraderie is evident throughout this buoyant session, released to celebrate the hundredth anniversary of Carter's birth. As Martin says in Ed Berger's discerning liner notes, "I never had more fun on a bandstand with anybody. He's clearly having a good time here, as are Carter and the perceptive rhythm section—pianist Roger Kellaway (a splendid soloist in his own right), bassist Jeff Chambers and drummer Harold Jones.

Carter's glossy alto sax glistens on every number save his own "People Time, on which Martin's flute and Kellaway's piano are paired in a charming duet. Martin plays tenor the rest of the way, starting with a playful cruise through Juan Tizol's venerable "Perdido. Martin wrote "Spritely, Carter "Elegy in Blue to enhance the album's standards "Secret Love and "Just Friends, the last of which crowns the concert while giving Jones a chance to solo.

Even though Carter is the ace in the hole, his colleagues hold strong suits as well and play them with awareness and finesse. When the cards have been dealt it's a winning hand, one that readily trumps any misgivings with unwavering proficiency.