Michael Camacho: Just For You

By SUZANNE LORGE
August 9, 2006
Sign in to view read count 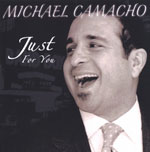 Michael Camacho, a silver-throated jazz vocalist, introduced his new CD, Just For You, with three sets at The Bacchus Room on May 24. Between the CD and his live performance, one thing is clear about Camacho. He knows what he's doing. And what he's doing is staking his claim as a front-runner among that rarest of songbirds today—the male jazz singer.

Lest this appellation conjure images of delicate crooners competing with martini shakers for attention, make no mistake about it: Camacho has a big, commanding voice. At one point in the last set of the evening the P.A. went on the fritz and Camacho continued singing, unplugged. "Since I have a pair of lungs, I'll sing without [amplification], he announced. His lungs carried the show all the way to the back of the room until the P.A. was up and running again.

Despite such TK Camacho exercises consummate dynamic control over his instrument. His phrasing is subtle and informed, which makes it easy to take his ingenuity for granted. Until he breaks into a scat solo, that is. At The Bacchus Room Camacho presented an extended blues version of "Honeysuckle Rose filled with confident, clever vocal solos. In another of the evening's pleasantly surprising turns, Camacho delivered the standard "S'Wonderful with an engaging Latin groove.

Camacho's originals, cowritten with bassist Francois Moutin, display a mature songwriting sensibility. He performed two in his last set at The Bacchus Room: "Here's To The Blues, during which he adroitly referenced "Route 66, and a lovely ode to the ups and downs of lifelong companionship, My Friend. These two originals appear on the CD, along with three others, including the title cut, "Just For You. This last, a straight-ahead, moderate number, contains a sampling of the more extensive scatting that Camacho offers in live performance.

On the CD Camacho alludes to his background as a pop/R&B singer by including top-40 hits like a laid-back, atmospheric "Spanish Harlem and a jazz rendition of the Beatles' "Norwegian Wood (a.k.a. "This Bird Has Flown. ). Camacho has had top-40 successes of his own: In another vocal incarnation, he was signed with Capitol Records and spawned a top-ten single as one half of the duo Sly Fox.

Aside from originals and the occasional pop melody, Camacho relies on comfortable favorites from the American Songbook. He also relies on the solid support of his band, with whom he's collaborated for the last five years. Besides the aforementioned Moutin, Camacho's sidemen on the gig and the album include percussionist Norman Hedman, pianist Tim Ragusis, saxophonist Dan Block, and drummer Marcello Pelliteri.

Just For You; I'm Old Fashioned; Blue Room; My Friend; I Should Care; Hey You; Norwegian Wood; How Can We Be Sure; Skylark; Here's To The Blues; This Is Always; Spanish Harlem.