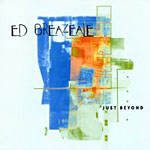 Drummer Ed Breazeale is that creative artist who wants to get it just right. In the notes to Just Beyond, Breazeale says that after he arranged each piece, questions lingered: was there a concept that was just beyond his reach, and was the message delivered? "Therefore," he says, "I subjected almost every piece to a series of abstract alterations. After undergoing the alterations, I recomposed or re-arranged each piece. This care shows in this mixture of originals and standards.

From Chicago, this young drummer plays the local club scene with his group, along with teaching music. His quintet—tenor saxophonist Jim Gailloreto, guitarist John Kregor, pianist Ryan Cohan and bassist Larry Kohut—takes his ideas and runs. Breazeale's last-minute tinkering with the numbers seems to show. The start-stop hesitation between beats between guitarist Kregor and drummer Breazeale, at the beginning of Kurt Weill's "Speak Low, before introducing a bossa rhythm, exemplifies his talent for getting the arrangement right.

Breazeale's drumming proves that a drummer/leader doesn't have to be overpowering. Throughout, he subtly displays his presence, underlining and punctuating each player's performance. In Rodgers and Hammerstein's "It Might As Well Be Spring, Breazeale starts off with a "giddy-up tapping on a cow bell. Then Gailloreto comes in with a wailing tenor solo before the leader's brief drum turn ends the piece.

Gailloreto is a standout throughout. In the original, "Contrafrance, he shows his debt to Wayne Shorter with a style combining free-form and mainstream. At the beginning, the piece suggests the cacophony of a big city street before going into Gailloreto's soaring solo.

Shorter gets his due with an interesting take on his composition "Footprints, a highlight of the recording. The cut features Breazeale throwing out clusters of drum beats, punctuating Kregor's guitar interlude and forcefully bringing on Gailloreto's resounding tenor.

A proper finish to the album is Strayhorn's "Chelsea Bridge, with its slow and mournful dirge-like pace, featuring Kregor's reflectively sober guitar.

Track Listing: Ode For Joe; Contrafarce; Greenpeace; Speak Low; It Might As Well be Spring; Fantasy In D; Footprints; Control Yourself; Chelsea Bridge