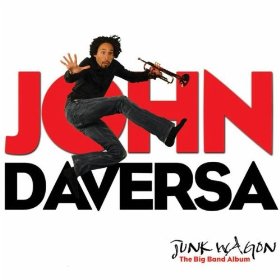 Constant stimulation is the name of the game on Junk Wagon. Trumpeter/composer John Daversa delivers nine pieces that reflect the hustle and bustle of today's world, without resorting to any big band clichés of yore.

Each composition, with the exception of the balladic "Most Of All," is a stylistic hybrid, where scattershot elements and shifting ideas make for a fascinating and unpredictable musical journey. Daversa's fearless exploration of the large group format takes him off the beaten path, as he creates bold and ballsy big band music for the modern epoch.

"The Bridge (Part 1)" serves as Daversa's opening salvo, where shredding guitar work, walls of harmonic sound, funky bass lines, rocking drums, frolicking upper winds, rap-like vocalizations from Katisse Buckingham, and punchy sound fragments come together to create the first of many wild rides. Daversa's big band writing is certainly busier than most, but information overload is rarely a concern. He pushes the limits, as amply demonstrated by his audacious EVI (Electric Valve Instrument) playing, but he's also cognizant of what those limits are. Trying to absorb everything that happens during some of these mile-a-minute numbers is impossible at first, but that's part of the power of this music. Repeated listening helps to reveal new wonders that initially whiz by at lightning speed, making them impossible to notice.

While the rapidly shifting pieces get the heart racing, they don't always remain memorable. In contrast, when Daversa chooses to revel in stylistic continuity, his music can leave an indelible imprint. The swampy "Your Mother" is a swaggering thrill ride that features fun riffing and noteworthy soloing from the members of the trombone section, guitarist Zane Carney and several others, while "Most Of All" is a beautiful, "relax and take time to smell the roses" kind of piece, which shows off Daversa's gentler side.

While most big bands basically have the same basic working parts, no two composers put them together in the same way, and John Daversa's designs are as unique as they come. Junk Wagon is bursting at the seams with originality, making it a joy to hear from the first notes to the last.