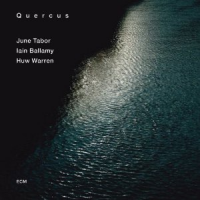 June Tabor has been superb for so long that it is easy to take her for granted as England's finest female traditional folk singer. Despite holding that status for many years, she has never seemed to rest on her laurels. Alongside the traditional folk songs on which she built her reputation, Tabor has a repertoire broad enough to include John Lennon's "In My Life," Lou Reed's "All Tomorrow's Parties," Elvis Costello's "Shipbuilding" and Joy Division's "Love Will Tear Us Apart," songs which indicate that her strength is conveying downbeat emotions.

On the album Some Other Time (Hannibal, 1989), she flirted with jazz, recording standards such as "Night and Day" and "Body and Soul." As an experiment, it was not a roaring success and Tabor did not approach jazz again until this trio was formed. Huw Warren has been Tabor's pianist and musical director since 1988. The members of Quercus first came together when saxophonist Iain Ballamy was invited to play on Tabor's album At the Wood's Heart (Topic, 2005).

Quercus, the trio's first album together, was recorded live in Basingstoke, in March 2006, towards the end of a British tour. Although Warren and Ballamy are both experienced and highly regarded jazz players and improvisers (and, yes, ECM is a respected jazz label,) this is far more a June Tabor album than a jazz album. For instance, right at the heart of the album Tabor sings an unaccompanied version of the English folk song "Brigg Fair"; predictably, it is breath-taking, but definitely not jazz. She is a wonderful interpreter of songs, being uniquely equipped to convey their narrative, drama and emotions, but she is not given to improvising or being creative with a song's rhythm or phrasing. Perfect for many things, but not jazz.

Despite that, the combination of Tabor, Warren and Ballamy creates a unique amalgam of folk and jazz elements which is highly successful because it does not attempt to pander to folk and jazz tastes simultaneously. While it blurs the boundary between folk and jazz, sensibly it allows all three musicians to be themselves and, does not attempt to "jazzify" Tabor or "folkify" the others. The songs on the album are a pleasing mixture of traditional and non-traditional, the latter including texts by Shakespeare ("Come Away Death" from Twelfth Night) and A. E. Housman (the First World War poem "The Lads in their Hundreds," set to music by George Butterworth) plus the love songs "This is Always" and "All I Ask of You" as well as David Ballantine's hauntingly enigmatic "A Tale from History (The Shooting)." Taken together, they cover a broad spectrum of moods and emotions, with the emphasis firmly on poignancy and melancholy.

The music provided by Warren and Ballamy perfectly complements Tabor's voice, providing settings in which it can be heard to best advantage. When she is singing, they do nothing to upstage her, the pianist acting as accompanist and the saxophonist occasionally unobtrusively shadowing the voice, both adding coloration and texture. When Tabor is not singing, the instrumentalists are more effusive, Ballamy in particular; without hogging the limelight, time and again he reels off fluent melodic saxophone interludes or solos which feel entirely logical in context and always enhance the piece. The album's main showcase for Warren is the solo piano track "Teares," a delicately beautiful piece inspired by English Renaissance composer John Dowland. Altogether, a very special album, certain to be one of the year's best. More soon, please.