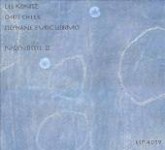 The wondrous nature of Jugendstil II is ensconced in the breathtaking improvisations of alto saxophone giant Lee Konitz, the way they intersect with the ideas of brilliant young tenor saxophonist Chris Cheek, and the effect they have on the birth of new compositions by virtuoso bassist Stéphane Furic Leibovici. The miraculous glue that holds it all together is the magnificently spare songs, both written and suggested. Add to that the exacting melodious bass lines that the maestro, Stéphane Furic Leibovici, annunciates and declares with his fluid pizzicato. Without intending to pick up from where Jugendstil I (ESP Disk, 2008) left off, this is a maiden voyage—beginning, appropriately, with the Homeric legend of Odysseus, "Odysseus Returns Home."

That the song follows a concrete path, rich in the exactitude of that imagery is a tribute to the language of Ezra Pound's Cantos the epic literary journey that laid the groundwork for modern poetry. Similarly, this song employs exquisite melodic counterpoint to establish the multiplicity of legend, as well as the voyage on the Iliad. The contemporary nature of the work is rooted in Furic Leibovici's broad, curved harmonics on a gorgeously tuned bass. "Tomorrow I Shall Dance For You" is a beautiful, dreamy melody enhanced by Konitz's glassy improvisations, goaded on by Cheek's modal tenor lines. Once again, Furic Leibovici roots the music in a bluesy vein. The hypnotic, seemingly slashed melody of "A Music of Tranquility" makes for a poignant cubist abstraction, with both Konitz and Cheek dancing eloquently around each other in a double helix manner.

"Float West on the Slender Current" is a vehicle for the saxophonists' entwining, and is orchestrated by the bassist, who goads the individual voices with forceful, precise notes, almost as if they were deliberately written. The spatial elements of this song make it all the more breathtaking. The next three tracks—"A L'ile De Fressanges (...Nuit d'Été...)," "Les Mains De Pénélope (...Le Jour, Elle Tissait...)" and "Phongsaly"—are somehow interconnected, married by the color of the thematic palette that describes the movement of the song's emotions. The first of this trilogy is again a dreamscape, made just so by the introduction of instrumentation including glockenspiel, vibes, harp. celésta and Chris Speed's clarinet. The spirit-like waltz time that shadows the compositions, and Konitz's sensuous playing, give the melodies a very physical—an almost deliciously fleshy—element.

There can be no doubt that "Local Heroes" makes oblique reference (at least) to Konitz and Cheek, who come from different eras, but meet at a point in time that is actually timeless. Their mutual respect and acute sense of history make Jugendstil II an effort that—as is the case each time a project is released under Jugendstil's name—continues to grow in significance and stature.