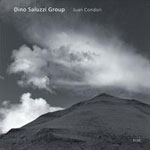 Juan Condori is useful if you want to find out how Dino Saluzzi, born 1935, a slightly younger veteran bandoneonist, sounds relative to Astor Piazzolla—not only is the setting comparable, but the music made by this family group is well worth hearing anyway. Saluzzi has the more lyrical turn of phrase, and the band has a more flexible rhythmic profile, performing the same kind of music as Piazzolla's, but with a clarinet doubling the saxophone, rather than a violin. There are also important contributions from a jazz drummer—not a member of the Saluzzi family, but a very gifted Italian who now calls himself U.T. Gandhi—and Dino's son, José Maria, who played on Mojotoro (1992), rather a long time ago the first Saluzzi group album on ECM.

José Maria Saluzzi has studied with Ralph Towner, among others, but regardless of his prospects as a jazz man, here he plays what his father calls tango and believes to be a more complex music than jazz. As in the drummer's case, jazz technique has been transplanted, properly ripened, into a different music, and with great results. Dino's brother Felix isn't a jazz clarinetist or even a jazz saxophonist, however, although all these guys could (or can) play jazz if they wanted to. His range of noises on tenor range from dancehall to classical, like one supposes the folk-based performances of this Argentinian instrumental music might work.

Felix's sound on clarinet is extremely pretty, unlike on the title track, where his nephew switches to acoustic guitar after a first pair of outings on electric. His tenor wheezes and brays and blends perfectly into music that's sometimes folksy but other times wanders into wild country for a bit in the middle.

If on balance less continuously dramatic than Piazzolla, Saluzzi can start dramatically enough, on for instance "Memoria," which, like much old New Orleans jazz (which this music hardly resembles otherwise), is sustained by the interplay between instruments, the lead passing from one to another to another. On "Soles/La Camposantena" the acoustic guitar's to the fore for a lot of the time, before the band materialises. On the next title, clarinet and bandoneon open in duet, and after soloing unaccompanied, the guitarist supports the bandoneonist, who then supports a second guitar solo. Telepathy can have its advantages.

"A Juana, Mi Madre" has ethereal work on electric or even jazz guitar, without being jazz per se at all. Very demanding, this music. "Los Sauces" means "the willows," and after some echoey clarinet and deep bass accordion, there's a little lingering near Messaien country. "Improvisacion" is just that, Saluzzi exploring with interventions from the drummer, exposing his instrument's kinship with harmonium/pipe organ.

It was a poetic idea to begin the last title with ripples and waves, seeming dawn impressions before a return to the dance. "More New Age than Jazz" according to one reference resource, this music's better referred to as tango, if you had to pick a term. Take Saluzzi's word for this music.