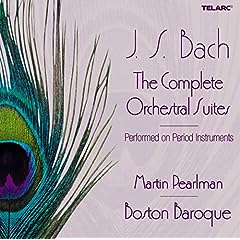 As prolific a composer (and patriarch) as Johann Sebastian Bach was, he managed to compose a precious few instrumental orchestral works. Besides solo instrument concertos, there exist only the six Brandenburg Concertos and the four Orchestral Suites. The fact that these two sets of orchestral compositions are instrumental may be all they have in common. The Brandenburg Concertos represent the best of writing in the Baroque Italian Concerto style, whereas the Orchestral Suites were composed in the French Baroque Style.

The Brandenburg Concertos were conceived and composed as a cogent series, assembled in a single, finished volume. Bach, on the other hand, never assembled the Orchestral Suites , into a discreet musical offering. There are no autographed scores of the Orchestral Suites, leaving scholars to derive the music from various hands other than Bach's, including his son Carl Philipp Emanuel Bach and his student Johann Ludwig Krebs. The numbering of the suites was not assigned by Bach himself but by scholars since, based upon the chronology of the pieces? composition. The first and fourth suites are thought to have been composed during the mid-1720s when Bach was taking his post in Leipzig. The third suite's composition dates from 1731 and the second from the late 1730s. The order of the suites is presented on this disc in this rough chronological order.

The Boston Baroque is perhaps America's finest period instrument group. With few exceptions, they have remained true to recording the mainstream of Renaissance and Baroque composition. From the Bach songbook, the Boston Baroque has previously recorded Bach's Brandenburg Concertos (Telarc Classical 80412) and Mass in B Minor (Telarc Classical 80517). Founded in 1973 by the American harpsichordist and conductor Martin Pearlman, Boston Baroque has established an international reputation for the excellence, accuracy, and precision of its performances.

Pearlman's exquisite scholarship, coupled with the seamless musicianship of his band, means that the hodge-podge that the Suites would otherwise be is averted and the fundamental character of each delicate movement is illuminated. The majority of the movements of the Suites are based on popular French dance forms of the late 18th Century, the focus is on crisply uncovering the individual character of each dance. In the C Major Suite (Suite No. 1), the rhythm of the Courante, as well as in the second Gavotte, is both lively and crisp, highlighting the woodwind trio accompanying the strings imitating horn blares. The lively Forlane exists in three layers: a sprite melody in staccato rhythms on top, wispy melodic figures in the middle voices, and a rock-hard bass line. The suite closes with two Passepieds based on the same melody: the tune from the first Passepied is presented as unison strings in the second, with the oboes spinning webs above them both." The group provides this same attention to the three remaining suites, accomplishing perhaps the most astonishing B minor Suite committed to record.

Since the mid-1970s, period instrument performances have been the rage of classical performance. Depending on the period, I always prefer them, but never to the complete exclusion of modern instrument play. While perhaps thin sounding, period instruments coupled with period performance practice produce an electrifying effect when compared to the modern, Romantic influenced performance that dominated conducting in the first half of the 20th Century. In the United States, only the Handel and Haydn Society could possibly be considered in the same breath as the Boston Baroque. Telarc, always sonically superior, offer the orchestra the crystalline medium with which Pearlman's group spins its magic. Bach's Orchestral Suites represent a significant addition to both the Boston Baroque repertoire and a worth addition to available recorded performances.