By JACK BOWERS
November 5, 2015
Sign in to view read count 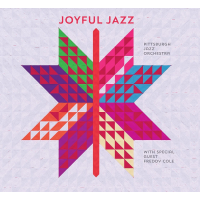 One way in which to launch an appraisal of this outstanding seasonal album, the first ever by the world-class Pittsburgh Jazz Orchestra, is to check out its candid—and uncommonly accurate—title. Joyful? Most definitely. Jazz? Without a doubt. For five years, the orchestra's annual holiday celebration has been a welcome tradition for families in the greater Pittsburgh area; now, the ensemble has decided to spread the good cheer to a wider audience by re-creating its exhilarating brand of Joyful Jazz in a recording studio.

When planning an album like this (or any album, for that matter), it certainly helps to have co-music directors of the caliber of trumpeter Sean Jones and saxophonist Mike Tomaro who are not only tasteful moderators but extraordinary musicians to boot. Jones opens and closes the album with gusto, gently caressing the melody before unfolding high-energy solos on Tomaro's buoyant arrangements of "Jingle Bells" and "Joy to the World" (the latter tossing in a Dixie-style coda for good measure). Tomaro scored everything else save the "colorful" themes "Blue Christmas" and "White Christmas" (arranged, respectively, by trombonists Jeff Bush and Jay Ashby). Guest Freddy Cole sings on "White Christmas," as he does on "A Cradle in Bethlehem" and "Jingles, the Christmas Cat" (an agreeable tune but not nearly as charming as the holiday evergreens it aspires to emulate, "Frosty the Snowman" and "Rudolph the Red-Nosed Reindeer"). At age eighty-four, Cole has more limited vocal assets than in his prime but compensates with personality and savoir-faire. Another seasonal favorite, "The Christmas Song," is marvelously sung by Pittsburgh favorite Maureen Budway who, sadly, succumbed to cancer at age fifty-one not long after the album was recorded.

In addition to those already noted, Tomaro's invariably handsome charts include "Carol of the Bells," "Do You Hear What I Hear?," "It's the Most Wonderful Time of the Year," "Snowfall," "Sleigh Ride" and "Merry Christmas, John Coltrane" (interweaving elements of "Deck the Halls" with Coltrane's "Giant Steps" and encompassing heated solos by Jones and tenor Eric DeFade). "Do You Hear," deftly introduced by drummer Thomas Wendt, is especially seductive; on the other hand, so are the radiant "Carol of the Bells" and "Most Wonderful Time." Tomaro's soprano sax helps enliven that one, as it does "Sleigh Ride," and he adds a crisp alto solo on "The Christmas Song." Masterful as they are, however, Jones and Tomaro are by no means the whole show, as trombonists Bush and Ashby, trumpeter Kenny Rittenhouse, flugel James Moore, guitarist Marty Ashby, bassist Paul Thompson and pianist Alton Merrell complement their artistry with impressive statements along the way.

If you're keen to spruce up the holiday season with appetizing big-band fare, you couldn't do better than inviting the Pittsburgh Jazz Orchestra into your living room for a bounteous serving of Joyful Jazz.

Jingle Bells; Jingles, the Christmas Cat; Carol of the Bells; A Cradle in Bethlehem; Do You Hear What I Hear?; It’s the Most Wonderful Time of the Year; White Christmas; Merry Christmas, John Coltrane; Snowfall; Sleigh Ride; The Christmas Song; Joy to the World.