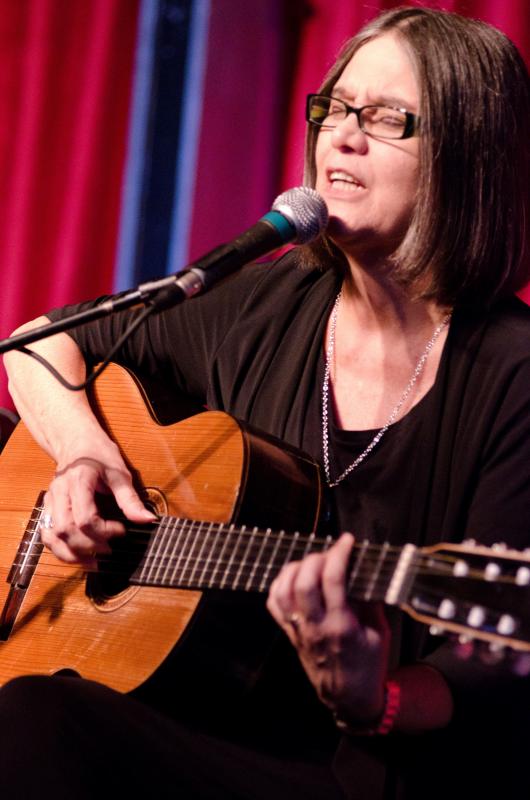 Many folks entranced by the magic of jazz also find their tastes gravitating towards artists form the Latin and Brazilian musical worlds as well. These musical styles actually share more in common with jazz than what might seem possible at first glance. The legacy and language of the music is something passed down over the years and placed at a high value by musicians and fans alike. In addition, the practice of improvisation plays a key part in the overall scheme of the music.

What possibly prevents a wider appreciation of particularly Brazilian styles is the extra effort involved in obtaining recordings and actually hearing the music in person, the logistical difficulties of international travel often being a key hindrance. That makes it a very special event when you get a Brazilian icon like Joyce Moreno embarking on an eight city, fifteen date tour of North America that would bring her to Nighttown. Although she has appeared at the club before, this is the first time in eight years that she has returned to the Cleveland Heights hot spot.

Featuring the same cast of musicians as heard on her most recent album, Raiz, Moreno couldn't help but be inspired by the elevated and deeply musical support offered by pianist Helio Alves, bassist Rodolfo Stroeter, and drummer Tutty Moreno. Each man played a key role in the success of the presentation. Adding Alves was a great choice, his incendiary playing often recalling that of McCoy Tyner. Stroeter, with his hollow body electric bass, planted firm roots that allowed drummer Moreno to propel the music largely with his hands, only using the bass drum for accenting purposes. Taken as a whole, the music exhibited an elastic quality that made it far removed from stereotypical bossa nova as heard in a cocktail lounge.

For the first few numbers, Joyce hit squarely on the feminine side of things with "Samba de Mulher" (Woman Samba) and "Essa Mulher," which is her beloved dedication to the late Elis Regina. On the latter, Moreno sang merely with the accompaniment of piano and bass, Stroeter's lush and reverberant chords adding more than merely a passing bass line.

The next several selections would come from the new album, whose title in English means "roots." The pieces she chose would be ones that have spoken to her over the years and she approached each one with a fresh, new look that was thoroughly engaging. While the Johnny Alf piece "Ceu E Mar" might not be well known, Jobim's "Waters of March" is much beloved and Joyce lent her own special appeal to it, while flashing her own perfect intonation. That same sense of originality even marked the well-known workhorse, "Desafinado."

The back end of the set included a perfectly charming reading of the jazz standard "Love for Sale," along with a few of her own classic compositions. Arguably one of her first important hits, "Feminina" fired off at a brisk tempo with Alves punching up the energy during his quicksilver, two-fisted statement. Worth noting again was how Tutty Moreno added to the intensity of the moment with minimal body movements and without resorting to bashing the drums. Following a thunderous response for more music, Joyce and crew returned for an encore. Vinicius de Moraes's "O Morro Nao Tem Vez" provided the perfect cool down and wrapped up a very special performance. Let's hope we don't have to wait another eight years for a repeat engagement!