Nektar: Journey To The Centre Of The Eye

By GLENN ASTARITA
April 7, 2013
Sign in to view read count 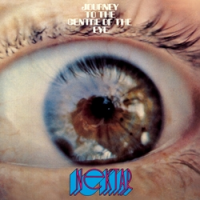 British progressive-rock band Nektar's epic 1971 Sci-Fi, spacey, psychedelic debut Journey To The Centre Of The Eye, benefits from a finely engineered re-mastering job, along with a vintage bonus disc featuring a live performance of the album. During its day, the band achieved great success outside its native UK and settled in Germany, where this production was recorded. This album paved the way for its seminal masterpiece Remember the Future (1973, Bellaphon) and other gold albums that followed.

A multipart storyline, this piece looms as an important tome for the time period. Meticulously crafted, featuring the band's use of mellotron; Syd Barrett (early Pink Floyd)-like slide guitar lines, streaming background effects and silvery organ parts, the music to some extent could be viewed as a forerunner to Pink Floyd's 1973 masterpiece, Dark Side of the Moon.

Roye Albrighton's raucous guitar solos often contrast temperate passages, featuring the artists' dreamy vocal choruses, hinting at sacred ground amid weighty sound-sculpting movements and ethereal textures. Add a few bluesy interludes and crashing cadenzas, the narrative aspects follow a storyline that is markedly inventive for its day, equating to a tightly coordinated fantasyland. The musicians also spice it up by integrating a few Ravel Bolero-like progressions. Otherwise, the audio processing was cutting-edge and these values hold forth rather effectively. Nektar recorded the program to 8-track tape as the early multi-track recording presented many time-consuming challenges.

Even though it may seem that these phantasmagoric progressive-rock motifs are dated, numerous modern era outfits are producing similar concepts, immersed in celestial travel, for example. Regardless, this old gem still sparkles 40 plus years after the fact.