Journey, the Doobie Brothers and Dave Mason at the Nikon at Jones Beach Theater 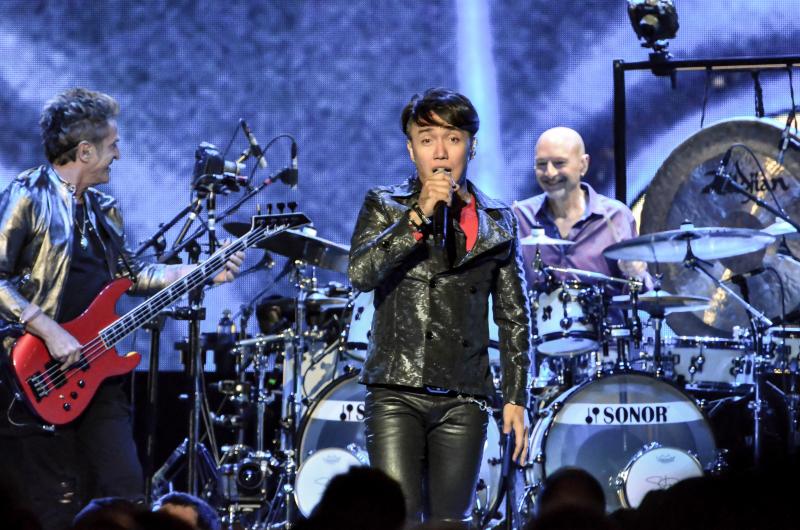 Journey was formed in San Francisco in 1973 by former members of Santana (Neal Schon on lead guitar and Gregg Rolie on keyboards and lead vocals) and Frumious Bandersnatch (bassist Ross Valory and rhythm guitarist George Tickner). Prairie Prince of The Tubes served as the original drummer. When Prince left to rejoin the Tubes he was replaced by Aynsley Dunbar. Soon the band was signed to Columbia Records and in 1975 released its eponymously titled first album. Over the years the band has gone through several musical phases as well as several lineups. Journey achieved its greatest success between 1978 and 1998 when Steve Perry held the position of lead vocalist. The band, during this time released a number of his singles including and "Don't Stop Believin,'" and "Open Arms." Its album releases which included Escape (Columbia, 1981), Frontiers (Columbia, 1983) and Raised on Radio (Columbia, 1986) soared to the top of the Billboard charts. In 1996, Journey released Trial By Fire (Columbia). The album peaked at #3 on the Billboard Charts and was the last to feature the classic lineup. Since that time, there have been a few personnel changes but none more prominent than that of the lead singer. Since Perry's departure Steve Augeri, Jeff Scott Soto and Arnel Pineda have all held down the title of lead vocalist of Journey. Journey's current lineup consists of Schon on guitar, Valory on bass, Jonathan Cain on keys and guitar, drummer Steve Smith and Pineda on vocals.

The Doobie Brothers evolved from a short-lived California band called Pud. In 1969, after Pud disbanded, guitarist/vocalist Tom Johnston began jamming with guitarist Patrick Simmons. The two guitarist decided to form their own group and named it the Doobie Brothers (after the slang term for a joint). The new band signed with Warner Brothers Records and released its eponymously titled debut album in 1971. Over the course of the past 45 years the group has featured a staggering number of official members and an even larger number of unofficial members. The Doobies have consistently delivered a musical gumbo that mixes rock, pop, country, funk, jazz, gospel, blues, R&B and swamp-pop boogie-woogie. The Doobie Brothers have sold well over 40 million albums worldwide, won numerous Grammy Awards, have released numerous studio, live and "Best Of" albums. The Doobie Brothers are currently comprised of founding members Simmons and Johnston on guitar and vocals, longtime member John McFee on guitars, electric violin, vocals (as well as harmonica on "Long Train Runnin'"), Little Feat co-founder Bill Payne (who has played on many Doobie Brothers albums and tours), on keyboards, Marc Russo on saxophone, drummers Ed Toth and Tony Pia and bassist John Cowan.

Dave Mason, along with Steve Winwood and Jim Capaldi, co-founded Traffic. He has been a member of Delaney, Bonnie & Friends and Fleetwood Mac, served as a temporary second guitarist in Eric Clapton's Derek & the Dominos and participated in the recording of George Harrison's All Things Must Pass (Apple Records, 1970) as well as Jimi Hendrix' Electric Ladyland (Reprise Records, 1968). In 1971 he formed a duo with Cass Elliot and released their eponymously titled album on Blue Thumb Records. He has also achieved fame as a best-selling solo artist and in 2004, Mason was inducted into the Rock 'n' Roll Hall of Fame.

On a somewhat cool late June evening at the Nikon at Jones Beach Theater, Mason and his band which featured drummer Alvino Bennett, Johnne Sambataro on guitar and Tony Patler on keyboards and vocals took the stage for a short but impressive set. The set featured incredible versions of solo offerings ("Only You Know and I Know," "We Just Disagree" and "Look At You Look At Me"), tight arrangements of the Traffic songs "Medicated Goo" (sung by Patler and introduced by Mason as "a song from a band I started when I was 18-years-old"), "Dear Mr. Fantasy" with an assist from McFee and "Feelin' Alright"(on which Simmons and Cowan joined Mason and his band), the incandescent cover of "All Along the Watchtower" and the deadpan opening quip, "Good Evening! It's nice to be here. As the senior member of this tour it's nice to be anywhere!"

After a short intermission, the Doobie Brothers, led by Simmons, Johnston and McFee stormed the stage diving headlong into "Jesus is Just Alright," one of their earliest hits. They followed with a ferocious "Rockin' Down The Highway" and then a rousing "Take Me In Your Arms (Rock Me A Little While)" from the Stampede (Warner Brothers, 1975) album. The band's set was truly career-spanning as it played hits and deep tracks from its classic catalogue including "Another Park, Another Sunday" and "Eyes Of Silver" from 1974's What Were Once Vices Are Now Habits (Warner Brothers) and newer songs such as the title track from their 2010 studio album, World Gone Crazy (HOR Records). The powerhouse set also features stellar versions of "The Doctor," "Takin' It To The Streets" and a fantastic keyboard solo by Bill Payne. The crowd was obviously into the performance, as it rose to its feet and stayed there while the Doobies closed out the main set with "Long Train Runnin'" and "Black Water." The audience got even more into it when it here the signature opening riff to "China Grove" followed by a fantastic lead vocal by Johnston. The band did not disappoint with the encores. Johnston came on stage and announced that he wanted to "do some more" and the band followed with a two-song encore of "Without You" and what would up being a sing-along version of "Listen to the Music."

When Journey hit the stage, it seemed like every 40 to 50-year-old woman in the audience perked-up and stood. Some knew that current lead singer Arnel Pineda was a vocal powerhouse. Others had no idea and didn't care. They seemed to hope that he would do a decent job channeling Steve Perry. Pineda did that and more. The diminutive Pilipino-born singer almost immediately won over the skeptics with his strong vocal performance on the opening number "Separate Ways (Worlds Apart)."

Pineda and his compatriots then provided the fans with what can only be described as the Journey Live Jukebox of Hits. "Only The Young," "Stone In Love," "Any Way You Want It," the ballad "Open Arms" and "Who's Crying Now" were interrupted only by Schon's melodic guitar solo, the deep cut "Line of Fire" from 1980's Departure (Columbia) and Pineda's statement that the band would be taking the audience to San Francisco for "Lights"

Though the performance was somewhat formulaic—the band interspersed its riff-laden hits with the power ballads that were know by heart by every teenage girl in the later '80's and early '90s—Journey delivered exactly what the audience, comprised of those now grown-up teenage girls along with their significant others, came to hear. All the while, Pineda played to the audience—not in a pandering way, but in the best possible way—holding his mic out to the crowd allowing the audience to sing and become part of the performance. Additionally, Pineda spent the evening in perpetual motion. While the band members played their musical parts perfectly, Pineda danced, juked, spun and almost perfectly recreated Perry's vocal stylings.

The rest of the main set was highlighted by faithfully recreated versions of "Escape," "La Do Da" (which included a fierce and intense Steve Smith drum solo) and "Dead Or Alive." The main set ended with the powerful 1-2-3 combination punch of "Wheel In The Sky," the power ballad "Faithfully" and "Don't Stop Believin'" (which was made famous again in the late 2000s and early 2010s when HBO with The Sopranos and FOX with Glee resurrected the song).

The encore was a tour-de-force version of "Lovin,' Touchin,' Squeezin'" that had even the most stubborn member of the audience singing and dancing at the top of his or her lungs.

On this evening Journey handled the longest stretch of the trip while sharing the driving with Doobie Brothers and Dave Mason's band on a crowded tour bus filled with the members of the audience. Through their music Schon, Smith, Pineda, Johnston, Simmons, Mc Fee and Mason carried the sold-out arena's masses back to a much more fun and simple time. And everyone on this crowded bus was happy to be a part of the experience.