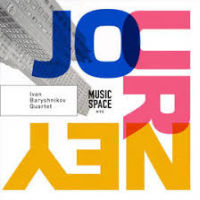 Capturing his East-to-West life trajectory, Russian saxophonist Ivan Baryshnikov's debut Journey documents his path through the jazz world via his origins in Moscow, an intervening stay in the Netherlands, and his ultimate arrival in New York, the end-point of his travels (for now). It's a well-conceived set of ten original pieces, with a convincing display of post-bop chops from the leader and his bandmates.

Baryshnikov's partners represent a cross-section of young talent; they're not household names yet, but they might soon be. Pianist Marko Churnchetz, bassist Ryan Berg and drummer Samvel Sarkisyan are well-suited for Baryshnikov's thoughtful compositions, and they display an appealing chemistry throughout the record. Like the leader, both Churnchetz and Sarkisyan hail from Central/Eastern Europe (Churnchetz from Slovenia; Sarkisyan from Russia), so there's undoubtedly a personal dimension to the record's concept for them as well.

The tracks are sequenced to reflect the three locations of Baryshnikov's musical path, with transitional pieces used to signal the move from one destination to the next. The opener, "Beehive," suggests that there was plenty of jazz under Baryshnikov's belt while still in Russia, as his assertive tenor brings plenty of brawn and rhythmic agility to his energized solo, while the band cooks enticingly behind him. Next, "Free of Duties" offers a shuffling funk beat, with some fine soloing from Churnchetz, while "Go On" features guest vocalist/lyricist Hiske Oosterwijk, whose nimble phrasing and precision help make up for some run-of-the-mill lyrics. The band's command of post-bop language is quite evident from the first three cuts alone, with strong soloing and excellent cohesion throughout. Drummer Sarkisyan is a particular marvel, as his relentless invention drives the band forward continuously with non-stop momentum and creativity.

Other pieces, like "Fever Blues" or "Moderate Breeze," stick to a mid-tempo simmer, and they're similarly effective in giving Baryshnikov a supportive foundation for solos that are both well-constructed and nuanced in their give-and-take with the rest of the band. The most exciting music on the record is without doubt the title track, with a brisk tempo, engaging structure and razor-sharp playing throughout to sustain plenty of interest for its six-minute duration.

Although they serve to demarcate the three locales of the record's "journey," the two transition pieces aren't quite as successful as the other tracks. "Transition One: Moscow-Amsterdam" is a serviceable fusion-flavored number, given its character by Churnchetz's Fender Rhodes-style keyboard, but it's not particularly memorable. Nor is "Transition Two: Amsterdam-New York," an unexceptional R&B-based diversion with laid-back vocals from Mark Evich that doesn't really click until Baryshnikov does his best to rescue it with a hard-edged solo that just hits its stride when the track unfortunately ends with a fade-out.

Slight mis-steps aside, there's more than enough top-quality jazz on Journey to justify keeping Baryshnikov, and his colleagues, on the radar for some time to come.