By TOM PIERCE
November 1, 2002
Sign in to view read count 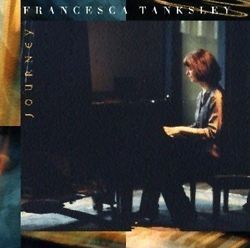 Pianist Francesca Tanksley has long captured the respect of musicians and audiences not only in the United States, but also worldwide, as an integral member for many years of the dynamic quintet of saxophonist Billy Harper.

Her career has expanded to include more of her own trio work, with stirring live appearances as well as this CD debut as a leader, Journey (Dreamcaller 7168). It features her arresting original compositions, accompanied by superb bassist Clarence Seay and propulsive drummer Newman Baker, both also in the Harper band. Throughout the recording, one also appreciates the way her sensitive, well modulated comping behind these two players, enhances without detracting from the soloist.

Tanksley’s playing, as well as writing, has an engaging appeal based on an impressive matching of warm and cool. Her consistently swinging attack and warm, bright touch that is firm, but always melodic, effectively balances her moving intensity, with a well-structured and often contemplative approach. It reflects traces of her acknowledged influences - McCoy Tyner, Wynton Kelly and Bill Evans; but has an individualism that is also demonstrated in the uplifting thrust of her various compositions. While each is unique in melody, tempo and chord structure, they share a common effervescent feel, with very appropriate titles, such as “Into The Light”, “In Grace”, “Earnestly, Tenderly”, “Never Defeated” and the beautiful “Prayer”, inspirationally sung by guest vocalist, Judy Bady.

Above all else, the CD reflects a strikingly mature artist who has successfully integrated a spiritually exhilarating approach to music with an intelligent, well crafted command of her instrument, in conjunction with the trio as a whole.