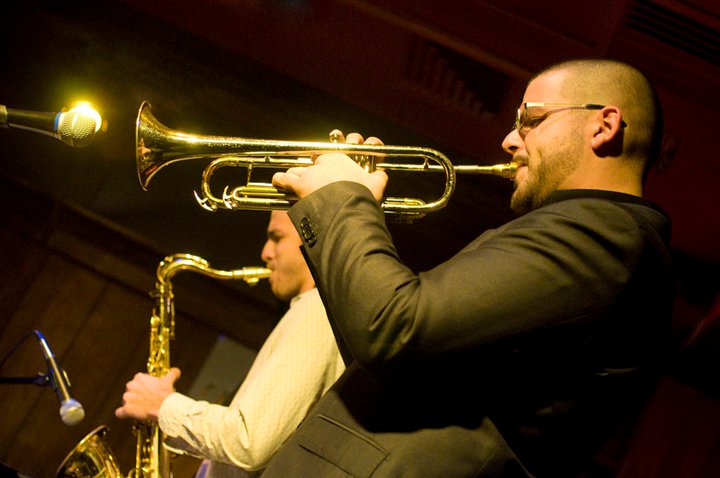 Josh Lawrence is a top-of-the-line, ascending trumpeter/composer/bandleader in Philadelphia and New York who in a few short years has three solo albums under his name, is a member of Orrin Evans' Captain Black Big Band and is co-founder of the hot new ensemble, the Fresh Cut Orchestra. He is also a member of Bobby Zankel's Warriors of the Wonderful Sound and an active participant with many other jazz artists. With such a list of accomplishments, you know he is going to deliver something interesting and unique. On this occasion, he brought on his own Quintet, including Downbeat-praised alto saxophonist Sharel Cassity, and a rhythm section consisting of Philly-based musicians Luke Carlos O'Reilly on piano, Nimrod Speaks on bass, and E.J. Strickland on drums. Together, they came across as a loose-knit yet cohesive ensemble who inventively bounced off ideas from one to the other in a way that kept the momentum and interest going.

This group's distinctive hard bop style had the flavor reminiscent of the gigs and jam sessions of expatriate musicians like Dexter Gordon, Kenny Drew, and Kenny Clarke (to name but a few) who traveled around Europe in the 1950s-70s and would meet up at clubs like the Monmartre in Copenhagen and rathskellers in Paris (as dramatized in the movie Round Midnight). Saxophonist Cassity, although her avowed mentor is Jimmy Heath, had more than a touch of Dexter Gordon's influence transposed to alto sax, and pianist O'Reilly had a deft rhythmic pulse reminiscent of Kenny Barron, while his resilient improvisational instinct somehow evoked recollections of Kenny Drew. Bassist Speaks and drummer Strickland, both seasoned and adaptable players, nevertheless sounded like they came eager and hungry straight out of a Paris jazz club, with Strickland's drumming a close cousin to Billy Higgins' percussive style. Overall, the music was exploratory but with a mainstream groove, a post-bop hard-swinging approach with flattened blues progressions that gave players like saxophonists Sonny Fortune and Bobby Watson their signature sounds.

To begin with, Lawrence's "Presence" had a hard bop imprimatur and a lively, swinging feel, beginning with a trumpet/saxophone statement and proceeding to a round of sophisticated solos. Lawrence's sonority was uncompromisingly bright, following in the traditions of Clifford Brown and Freddie Hubbard with more than a touch of Woody Shaw popping up now and then. Another Lawrence composition, "The Conceptualizer" offered a fine example of a slow, lightly walking blues that tells a story. Lawrence's muted trumpet had such a fine sound that it could have gotten him an audition for the Philadelphia Orchestra. In his soloing on this piece, pianist O'Reilly showed himself to be an under-recognized gem of an improviser, with an acute sense of rhythm and rich imaginative capacity.

Lawrence's "Bourbon's Bounce," a thinly veiled reference to Charlie Parker's "Billie's Bounce," had rather a Monkish feel, seeming almost a contrafact of "Well You Needn't." O'Reilly played lightly with Monk's inflections, and Strickland's drum solo sounded like bop with a Thelonious punch. The piece seemed to place Monk back at the head of the bebop movement where he began his career.

In their rendition of trumpeter Eddie Henderson's composition, "Dream," the group made good use of changing time signatures, and O'Reilly, with his precise but resilient sense of rhythm, delivered a stunning piano solo, itself a spontaneous impressionist composition. His own piece, "Black Lives Matter" was delivered as a piano, bass, and drums trio. It was a natural follow up half-a-century later, to John Coltrane's "Alabama" and other jazz exhortations from the Civil Rights Movement. Strickland's passionate drum solo drove home the message of grief and a plea for healing just as Elvin Jones did on "Alabama."

The set concluded with Cemprola's "Megabus," a difficult to play bebop melody with peculiar twists. Unlike most leaders, who let the mistakes fly past them, Lawrence stopped the band and fixed them, mentioning Charles Mingus' tradition of "workshopping" tunes during actual performances. There was something distinctly schizophrenic about this tune, and this reviewer wished he could see the score so he could psycho-analyze it. It spoke to the way this group seeks a challenge, which was one of the pleasures of the evening: to hear a group dedicated to transmitting ideas rather than emitting clichés.