Josh Ginsburg at An Die Musik in Baltimore 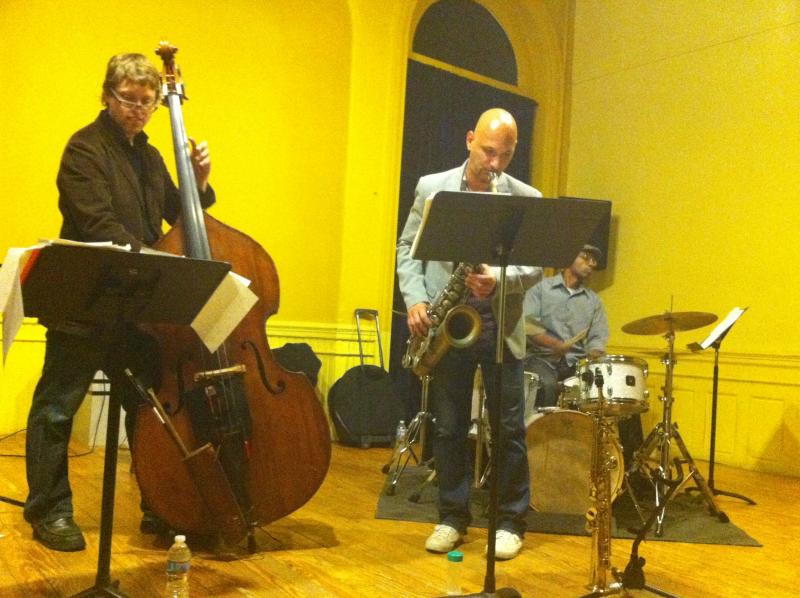 Josh Ginsburg celebrated the release of his new CD, Zembla Variations (Brooklyn Jazz Underground, 2012), with two special performances, one at the Jazz Gallery in New York on January 12 and the other two days later at An Die Musik, a cozy, loft-like venue in Baltimore. Zembla Variations marks Ginsburg's debut as a leader, after having been an especially active jazz bassist in the New York area over the past dozen years, in addition to touring in Europe and Asia. He was joined by his collaborators on the CD, Eli Degibri on tenor and soprano sax, George Colligan on piano, and Rudy Royston on drums—all of whom are among today's most accomplished jazz instrumentalists. While they aren't yet household names, they've all had important associations with major jazz heavyweights: Degibri has toured with Herbie Hancock, Colligan is in Jack DeJohnette's current band, and Royston is working regularly with Bill Frisell. Ginsburg himself has an impressive resume, having played with Tom Harrell, Mulgrew Miller, Kenny Barron and Bobby Watson, in addition to regular work with Colligan's own trio, and Marcus Strickland and E.J. Strickland.
The quartet's performance in Baltimore was a homecoming of sorts for Ginsburg, who grew up in the city before making his way to the Red Hook section of Brooklyn, where he wrote most of the compositions on the CD. The CD's title, in fact, is derived from Ginsburg's nickname for Red Hook—"Zembla"—borrowed from a fictional land in the 1962 Nabokov novel, Pale Fire. In the notes to the CD, Ginsburg describes the novelist's Zembla as a "mad fantasy."
Never having been to Red Hook myself, I can't say whether or not Ginsburg's compositions evoke the area, but there's plenty of fantasy in them. Ginsburg's quartet started out his set with the CD opener, "PushBar (for Emergency Exit)," a dramatic piece inspired by sounds of the New York City subway. "Oxygen" held a relaxed, strolling feel, with romantic playing by Colligan, followed by "Gently," a ballad-like composition in 7/4, which included an outstanding solo workout by Ginsburg. "Red Giant" nicely featured some exciting improvisation on Degibri's part on tenor, along with a climactic drum solo by Royston. Stevie Wonder's "Too High" provided a fun change of pace in the set, featuring a playful arrangement where Ginsburg took the melody line in his instrument's upper register.

On the whole, the outing had its fill of great, adventurous playing by Ginsburg and his colleagues. Here's hoping he takes on more opportunities to showcase his fine writing and virtuoso musicianship sometime soon.