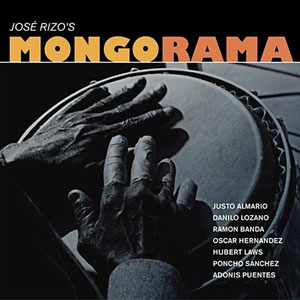 Mongorama. The name just sounds like fun—and this is a fun record, despite being crafted by musicians who take the Afro-Cuban music and legacy of Mongo Santamaria very seriously. Organized by jazz DJ Jose Rizzo, the band highlights a mix of Santamaria classics, blended with newer compositions in the same tradition.

Any album that associates itself so closely with a great conguero like Santamaria is bound to feature lots of hand drumming, and Mongorama does not disappoint. Joey De Leon covers most of the album, with a guest solo from Poncho Sanchez on "Asi Es La Vida." Front and center, the congas are and masterfully played but the disc's pace remains measured—up-tempo but never overwhelming—about solid groove rather than frenetic, hell-bent thundering drive.

The band features several Santamaria alumni, opening with flutist Hubert Laws, who blows a terrific extended solo over the infectious conga beat of "Bacoso," showing why he so richly deserves his NEA Jazz Master title. Violinist Dayren Santamaria—providing one of the album's signature instrumental sounds —immediately follows with an with an equally exceptional improvisation. Violin is a triple threat on most tracks; in addition to soloing, it's used as a romantic background texture behind Adonis Puentes' fine vocals, as well as melodic comping behind other soloists.

Pianist Oscar Hernandez and tenor saxophonist Justo Almario provide further highlights. Both are clearly well-versed in this music's tradition, while also blending elements of modern jazz into their solos. Hernandez adds a hint of discord that sounds thoroughly up-to-date on "Que Maravillosa," while Almario is featured on "Bluchanga," blowing his horn in the best post-bop tradition.

With ten band members and four guest soloists, there is a lot happening on the plush-sounding Mongorama, where that much musical firepower affords the luxury of layering textures and multipart harmonies. Musical Director Danilo Lozano takes full advantage of his resources to command a truly gorgeous sounding band. With great music and impeccable musicianship, Mongorama is an outstanding recording...and just plain fun.