Anytime I make a record, it 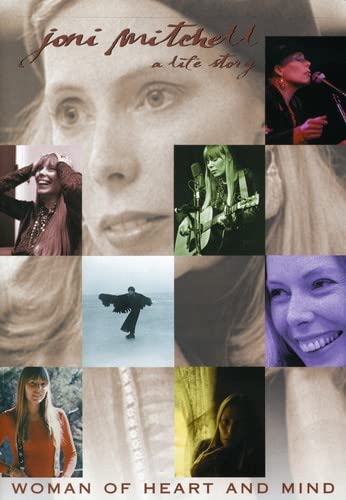 Joni Mitchell: Woman of Heart and Mind is an outstanding Digital Video Disc (DVD) of the Canadian folk singer who discovered life in art, and kept on dreaming of better times. Producers Susan Levy and Stephanie Bennett leave room for us to make our own sense of Mitchell’s narrative. Through a highly creative blend of concert footage, paintings and retrospect, viewers cannot help but be arrested into self-assessment. “It’s hard peeling the layers off your own onion,” says Mitchell. That is exactly what this documentary does: undress popular perceptions with multiple grains of truth.

Joni Mitchell defined her fortitude early. Elliot Roberts recalls introducing himself and telling Joni that he would kill to manage Mitchell’s new career in music. She replied that he could meet her in Ann Arbor, MI because she was beginning a three-week road trip. When Roberts showed up, Mitchell agreed to let him run the road show as long as he paid his own expenses. The ingredients of a music dream: player, songs, instrument and audience. Okay, a manager too.

Word of Joni Mitchell’s stellar talent spread like wildfire. David Crosby describes how he was riveted to the back wall of a New York nightclub in the late 1960s to hear Mitchell for the first time. Many years later, Crosby’s musical partner, Graham Nash, would recall watching Mitchell write her music: “It’s a great thing to see...somebody taken away by vision.”

“She was the subject and she was the painter,” says Bill Flanagan of MTV Networks.

Cognition and introspect has a traditional habit of ruining poets and their fans. Through her life, Joni Mitchell has worked herself beyond several brushes with self-destruction to keep playing. That is, itself, an accomplishment.

Then, there’s the music. When Joni Mitchell missed Woodstock, she stayed back in a hotel room in New York and wrote a song instead. She was to appear on The Dick Cavett Show the next day. As luck would have it, Crosby, Stills, Nash and Young (who did play Woodstock) got back to New York in time to appear on the same show. Mitchell describes being devastated at missing such an important cultural event. The song was, however, a positive result of the pain – a persistent theme through Joni Mitchell’s career. “She contributed more toward people’s understanding of that event,” says Crosby, “than anybody that was there.”

“I had no idea,” says Herbie Hancock, “she had that much...freedom in her approach to the music that was so compatible with jazz.” Jaco Pastorius collaborated with Mitchell for four records in the 1970s and Charles Mingus would come – calling on Mitchell to place her poetry on Mingus’ last record.

Ultimately, Canada has rooted Joni Mitchell through some of her greatest life teachings. When she was confused and tired following her ascent in the folk genre, Joni went to the wild bush of Canada to live without electricity for a year. Although she journeyed back to the music world, Mitchell would not reclaim her previous commercial standing. No matter. The artist continued to cast herself in search of the new language in music, in whatever genre that may emerge. Joni made a pivotal pilgrimage to Vancouver to bring closure to a deeply personal wound from the past. Much of Mitchell’s healing has happened north of America’s 49th parallel.

Joni Mitchell: Woman of Heart and Mind ends beautifully. Joni is finally reunited with her daughter, Kilauren Gibb, in a spellbinding combination of photos, paintings, impressions and ideas. One feels the urgent catharsis of that occasion for Joni as a person. This DVD is a treasured keepsake of Joni Mitchell’s work.