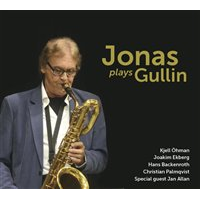 Long after his death in 1976, Lars Gullin still casts a long shadow over the Scandinavian jazz scene. The baritone saxophonist was the first Swede to be accorded international recognition. He was one of Zoot Sims' Five Brothers in 1950, played with James Moody, Stan Getz, and Leonard Feather's Swinging Swedes. He won the 1954 Downbeat poll as "new star" on baritone without ever having set foot in the U.S.

Today, the house where he was born on the Baltic island of Gotland is a museum, the Swedish record company Dragon is slowly but surely re-releasing his entire recorded oeuvre, and the Lars Gullin Prize is one of the nation's most prestigious jazz awards.

Unfortunately, this record—another in a long string of tribute albums over the years—is a rather lackluster affair. Bertil "Jonas" Jonasson, a former dance band musician from the western province of Dalsland, simply cannot fill Gullin's shoes, and the session is too often blighted by sugary arrangements featuring Kjell Öhman's synthesized strings.

There is also the fact that Gullin is overvalued in Sweden. While he was the first jazzman to lend a specifically Scandinavian feel to his compositions—pastoral and melancholic—his output was uneven due to drug and alcohol abuse (Gullin became something of a drug culture hero when he was famously but falsely credited with finding pianist Dick Twardzik dead in his hotel room in Paris during his tour with Chet Baker in 1955).

Perhaps the most interesting of the songs featured here is "Dyningar," a term for swells on lake or sea surfaces. The song reflects a traditional Swedish love of the water and nature in general. "Peter of April" is a lyrical celebration of the birth of Gullin's son during a 1959 tour of Italy. Peter Gullin, who went on to become a baritone saxophonist in his own right, died of cancer in 2003. "Merlin" was fine when recorded by the elder Gullin in 1952. Here it suffers sugar overdose.

The suite—which combines "Toka Voka Oka Boka" and "The Waltz"—contains some interesting echoes of Swedish folk and classical music, while the opener "Without a Chance" is a nice, straight ahead swinger. The latter features solos by the leader and guitarist Krister Palmquist that are, well, workmanlike—an adjective which can also be applied to the album as a whole.