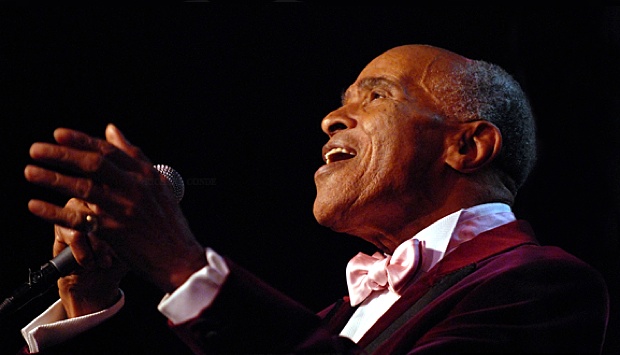 By GREGG AKKERMAN
March 27, 2012
Sign in to view read count
Jon Hendricks is still swinging madly and looking forward to upcoming projects—not only in New York, but all over Europe. Having interviewed the creator of vocalese once before, he was the first name I thought of when considering the maiden edition of this Jazz on the 90th Floor column (the name comes from the lyric to Cole Porter's "Down in the Depths" by the way). When I realized Hendricks is 90 years old, the match was too much to resist. During the course of our two conversations, Hendricks opened up about a variety of topics that reveal his fond memories, keen humor, enduring professionalism, and a willingness to challenge the very history of jazz as it is usually taught. He would sometimes deviate the conversation from my original question, but when the man talking is as fascinating as Jon Hendricks, you just go where the flow takes you.

All About Jazz: Tell me about your gig coming up at Dizzy's Club Coca-Cola, at Jazz at Lincoln Center.

Jon Hendricks: I'm going to be a guest of [singer] Sachal Vasandani.

AAJ: How did that come about?

AAJ: This Dizzy's gig is several nights back to back and that's unusual compared to most jazz gigs these days.

JH: Yeah, but that's because of Sasha.

AAJ: The last time we spoke you told me about a concert in England to debut a Miles Davis piece.

JH: I'll put it on this November. It's the Miles Ahead (Columbia, 1957) album in vocalese. The choir is from the Royal Academy of Music. After England, it will go all over Europe. I wrote lyrics to what Miles and the band did together and that's what we sing. It's going to be like the orchestra, but instead of the instruments, they'll be voices, and I wrote words for everything. I'll be singing Miles' solos.

AAJ: How do you think Miles would feel about that?

JH: He liked me singin' his solos. When I wrote the words to "Four," he said [imitating Davis' raspy voice], "Yeah, Jon."

AAJ: How do you reproduce Miles playing with a mute?

JH: Just sing softer and maybe put your hands over your mouth.

AAJ: Tell me about your vocal group at the University of Toledo. How does it work that you are the director but live in New York?

AAJ: Following up on a topic I know you have strong feelings about, tell me more about who you think wrote "Stardust."

JH: Luckey Roberts. His family was West Indian and they named him Luckeyeth, but that got shortened to Luckey. He was a great stride pianist who hung around James P. Johnson and Fats Waller. Lucky Roberts wrote "Stardust" and sold it for 25 bucks. A lot of songs were written by black people, like "I Can't Give You Anything But Love" has white songwriters listed but the black people sold it. That was the only way they could make money 'cause ASCAP wouldn't let them in. That's one of the disgraceful aspects of American history. And these great songs like "Stardust" get written by Luckeyth Roberts and sold for 25 dollars to Hoagy Carmichael. If you hear Hoagy play, you know he never could have written that song. Mitchell Parish, who wrote the lyric, I played him Louis Armstrong's "Stardust," where he sings the verse:

I invited Mr. Parish out to lunch with Phoebe Jacobs as a witness and I played that for him. He turned to her and said, "How the hell did he know that?" He proved it.

AAJ: There are people who will question that.

JH: Well, you question it if you want, but I don't have to question it because I know what the answer is.

AAJ: Were there songs you wrote that you never got credit for?

JH: Well, "Watermelon Man." That was my lyric, but Herbie Hancock decided to forget that he asked me to write it, so he didn't pay me anything. And it was a worldwide seller too. He was a real good businessman, but I wouldn't recommend you doin' any business with him [laughs].

That's happened a lot, that I didn't get credit. I used to stand on a street corner with Quincy Jones in front of the Brill Building and we'd try to get our tunes published. I was always hanging out down there. Frank Loesser had a song factory up on the fifth floor where he had young writers writing tunes, but he'd put his name on them. Two guys who did that for him were Adler and Ross. Adler wrote the words and Ross the tunes. They used to come out for lunch and us guys on the corner would say, "Here come Adler and Ross: the two evils of Loesser" [laughs].

AAJ: Before we finish, there's something I wanted to make sure and ask you. I've been doing a lot of listening to ballad singing lately, especially Johnny Hartman. Do you sing slow songs these days?

JH: As often as possible. I loved his style. I used to do that. I had an album I made in England with 18 strings from the London Symphony that's all ballads. Tony Bennett heard it and said, "I had no idea you could sing like that," and I said, "Yeah, before I was a hip, reefer-smokin' jazz singer I used to sing ballads." I still like to do it. Those string players performed with some of the most gifted classical singers in the world. At first when they played with me they were very polite and said, "Good day," but nothing else. But finally, at the last song after three days of recording, all 18 of them stood up and gave a standing round of applause for about four minutes. It was really beautiful. It will stay with me the rest of my life.