By CHRIS MOSEY
November 9, 2016
Sign in to view read count 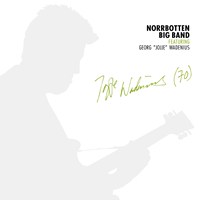 The province of Norrbotten is the furthest north you can go in Sweden. It is a place of granite mountains, their summits capped with snow most of the year and circled by golden eagles. In the valleys the Sami people, wearing colourful folk costumes, herd reindeer and drink coffee laced with salt from wooden cups.

It is a somewhat unlikely place to find what might well be the most creative jazz orchestra in the world, the Norrbotten Big Band.

Far to the south lies Stockholm, the Swedish capital, a place of high rise apartment blocks, decorated with colourful graffiti by local teenagers. Elks from outlying forests occasionally wander into town. In smart coffee houses known as konditori, natives wearing the latest fashions, drink caffé latte, usually from glasses. This may be flavoured with all manner of exotic spices, but never salt.

Georg "Jojje" Wadenius was born here but found fame in the United States playing lead guitar with the rock band Blood, Sweat And Tears from 1972-75. This double album celebrates his 70th birthday.

While he plays with the band on every track, Wadenius doesn't hog the limelight or get in the way of an abundance of musical creativity generated by director Joakim Milder.

"The Traveller," by composer-in-residence Peter Danemo, opens on an ethereal, choppy note before the band comes in behind Jacek Onuszkiewicz doing spacey things on trumpet.

Danish composer Anne Mette Iversen, best known for her work with the Brooklyn Jazz Underground, is based in Berlin. She communicated with Wadenius by email while writing what became "The Wadenius Strut." It's a misleading title for a very interesting song of changing moods, with gentle, melodic passages.

CD2 features vocals by Wadenius on "Snakes In A Hole," a song he wrote in 1969. It was recorded live during a tour he made of Norrbotten with the big band. Along with the birthday boy himself, Erik Lindeborg and Arvid Ingberg contribute solos on piano and trombone respectively. To judge from the applause, an exceedingly good time was had by all.

In the Middle Ages Norrbotten was written off as terra nullius, "no man's land." Today, with its big band, it bravely goes places where no other jazz orchestras have gone before... at least not in quite the same way.

CD1: The Traveller; Light Blue And Purple; The Wadenius Strut; In The Pocket; Torshavn By Night. CD2: Underground; Music From The Jilted; Just Now, Just Then; Snakes In A Hole.