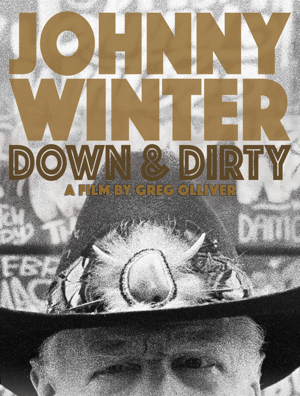 Johnny Winter's life and times were so colorful that even a painstakingly conceived and executed documentary such as Down & Dirty almost begs credibility. Yet as closely as the film delves into the albino bluesman's lifestyle in his later years, on the road and off, it makes a viable case that his album Still Alive and Well (Columbia Records, 1973) was just the first step in his road to recovery. Mary Lou Sullivan's excellent bio Raisin' Cain: The Wild and Raucous Story of Johnny Winter (Hal Leonard, 2010) offers excruciating detail of the physical and psychic bondage Winter's management applied to him post-recovery (sic). In contrast, early footage in this DVD depicting Winter in training, along with testimonials of his progress over recent years, illustrates his much improved state of mind and body toward the later years of his life (he passed away in 2014). But as much as this film chronicles the life and times of a contemporary blues icon, Down and Dirty also is a history of the blues itself from the very specific perspective of Johnny's lifelong devotion to the genre.

Thus, the management-stipulated digression to rock in the early Seventies, via his alignment with Rick Derringer & co, was thus ultimately a means to return to what he loved most through his collaboration with Muddy Waters later in the decade. Juxtaposing the day-to-day support so affectionately and professionally afforded Winter by band mate and manager Paul Nelson, not to mention the rest of the entourage, on a tour and personal appearance schedule in the last years of Winter's life, filmmaker Greg Oliver manages to capture the stalwart resilience Winter's demonstrated, even at his low(est) points. Footage with film of Winter and his early trio, plus his sibling Edgar, performing at Woodstock in 1969 (a direct result of his mega-bonus signing to Columbia records) illustrates the timeline in remarkable terms.

Even more revelatory is the candor Winter displays during interviews discussing his heroin use. It's evidence of the deft editing within