By ANDREW VELEZ
November 9, 2009
Sign in to view read count 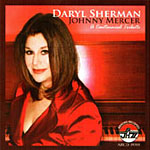 Choosing "I'm Shadowing You" as the opener on Daryl Sherman's fine Centennial Tribute to composer and lyricist Johnny Mercer inevitably recalls Blossom Dearie. Heretofore that tune has pretty much been the exclusive property of the late vocalist. There are also other, more than passing, resemblances between the two singers, both first-class self-accompanists on piano possessing underage sounding voices used effectively to slyly charming ends.

With a legacy of 1,500 heartfelt and humorous songs, Mercer's is a rich one from which to choose. Sherman's selections are a welcome mix of classics such as "Come Rain or Come Shine" and "Midnight Sun" with more than a few choice rarities like "The Bathtub Ran Over Again." On the latter Wycliffe Gordon joins Sherman for a delightfully foxy vocal duet. His gravelly sound contrasts perfectly with Sherman's petite smoothness. "Little Ingenue" (co-written with Jimmy Rowles) is another gem. Here Sherman's silken glissando, backed by Jerry Dodgion's alto sax, is especially effective in capturing hope in the face of glamour that's a tad shopworn.

On "Dream," one of the few songs for which Mercer wrote both music and lyrics, Gordon's trombone provides the most sensitive of accompaniment. As Sherman conjures "smoke rings rising in the air," he is playing heavenly notes behind her. It is a great, great song performed to perfection. The artistry and empathy between Sherman and her fellow musicians makes for a set that is a glowing tribute to one of the great masters of the jazz idiom and the American Songbook.