By GREG THOMAS
September 9, 2009
Sign in to view read count 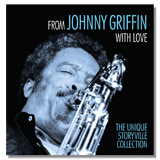 Chicago native Johnny Griffin was undoubtedly one of the greatest artists to ever play the tenor saxophone. His technical capacity at high velocity tempi was legendary, earning him the nicknames "fastest gun in the West" and "Little Giant." Not mere empty displays, Griffin's virtuosity served his expressive needs.

As Frank Foster has written: "His blazing speed in producing one dynamite phrase after another in rapid-fire succession seemed to be equaled only by the logic in his musical statements—not just a 'lot of notes' with most of them meaning nothing—they made lots of sense, told a story, were completely, harmonically relevant and yet uniquely constructed in his own style." Griffin was also a blues master and a balladeer of deep emotional resonance, especially in the latter decades of his career, which spanned 65+ years before his death in 2008.

This three-CD, one-DVD collection features live sessions from the '60s-80s. "I think that you need an audience to bring the personality out of yourself," Griffin said in an interview with Bob Bernotas. "That's why I hate to play in the studio, 'cause I don't have anyone to play to. When I play I like the vibrations of people, 'cause it helps me create. I want to see people, not microphones."

The first CD, recorded at the Montmartre Jazzhouse in Denmark in 1964, has him with drummer Art Taylor, pianist Kenny Drew and 18-year-old wunderkind bassist Niels-Henning Orsted Pedersen, who displays the facility and agility that made him a favorite of Griffin, Dexter Gordon and Oscar Peterson. Taylor and Griffin perform "Wee Dot" at a furious pace and on "What Is This Thing Called Love," Drew's comping and solos sparkle. A gentle treatment of "Body and Soul" highlights the soft and furry side of Griffin's personality. Yet the most intriguing cut here may be Griffin's original "Doctor's Blues." He alternates singing mock mournful lyrics with melancholy riffs on tenor and brings laughter to bear on the blues.

The second CD fast-forwards 20 years to the last recording of Griffin and Eddie "Lockjaw" Davis, a fellow "tough tenor" with whom he partnered on nine records. Davis was an original stylist comfortable in any genre from swing to hard bop and a wonderful foil for Griffin, as on "Blues Up and Down" and "Lester Leaps In," where Davis' unorthodox, gruff phrasing contrasts with Griff's sinewy runs and high-note screams. Another Griff blues, "Call It What You Wanna," is notable for the tight accompaniment by drummer Kenny Washington, bassist Curtis Lundy and the pianist Harry Pickens. The song is also another example of Griffin's fine writing skills, an asset best demonstrated on The Cat, his 1991 masterpiece.

Kenny Drew, who like Griffin was an African-American expatriate in Europe, rejoins him for Disc Three, a joyous affair recorded in Copenhagen in 1989. On "Just Friends" Griffin still plays fast but not with as many notes; by this point he had nothing to prove. The mid-tempo "If I Should Lose You" finds him alternating between swift passages and allusions to the melody in a mid-song cadenza. Billy Strayhorn's "Isfahan" is taken at such a slow tempo that Griffin luxuriates in a Ben Webster-like reverie of lush tones. Evidence of a mellower Griffin is apparent on this date, his intensity and fire tempered by maturity.

The Village Vanguard is the location of the set seen on DVD. This 1981 date is Griffin at the height of considerable powers of swagger. Hearing him play tenor on CD is one thing; seeing his prowess and command with a perfect supporting rhythm section—pianist Ronnie Mathews, bassist Ray Drummond and a young Kenny Washington—is another. (Lockjaw, in a separate date, is also featured in an equally revealing session.) Three Griffin originals are featured: a brisk blues and two compositions introduced originally on Return of the Griffin in 1977—a tribute to Thelonious ("A Monk's Dream") and "56," taken at an audacious tempo.

Good time music played passionately with precision while swingin' with virtuosity and soul; that was Johnny Griffin.