John Zorn: John Zorn: In Search of the Miraculous 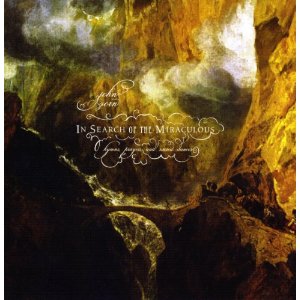 In Search of the Miraculous

John Zorn's compositions revel in a rare blend of allusion and mystery. His albums often exist both on a self-contained level as individual works of art, yet are simultaneously layered with tokens and tributes to the many artists who have shaped his unusually eclectic aesthetic. While the first album of his Alhambra Legacy compositional project consisted of a collection of light and airy melodies for piano trio, the second, In Search of the Miraculous, draws overtly for inspiration on Georges Gurdjieff, the 1920s Greek-Armenian mystic and composer.

Gurdjieff as a composer drew off the musical forms of Eastern Europe and Asia, including Armenia, Turkey and the Greek Orthodox Church. Similarly, Zorn's fascination with mysticism has appeared in a variety of forms throughout his work, both through his classical explorations of occult themes and in his probing experimentations with Jewish music. Much like Gurdjieff, Zorn here bases his compositions on a set of Eastern modes, using undulating waves of repeated figures to create a trancelike, minimalist sound.

The Alhambra Trio's 2009 debut played Zorn's latest compositions in a style that has become particularly interesting to him—brief pearls of melody that, in the vein of much of his work, defy genre. On this disc, however, he weaves together a much more mystical sound. Melding together elements of his file card composition process, which involves the cutting together of disparate musical ideas much as a director edits the scenes of a movie, Zorn has done something truly original with this quintet. The pairing of Shanir Blumenkranz on Fender bass and Greg Cohen on double bass makes for a rich bottom, while Kenny Wollesen's vibes add a certain otherworldly glow to the band. Rob Burger reprises his role on piano, and his warm touch makes even repeated Philip Glass-like figures hypnotically lyrical. Moreover, despite the mellow tempos, overt prettiness and hypnotic repetitions, this music moves and grooves with a dervish intensity.

Such intensity appears in Gurdjieff's songs, but it has never sounded like this. The use of Fender bass, the touches of improvisation from five master players, and Zorn's eclectically prismatic view of composition make the songs truly original. The result is a meditative atmosphere with a distinct rock and soul influence. The centerpiece of the album is the nine-minute long "The Magus," a delirious and evocative piece of composition that rolls through evolving repeated lines, complex time signatures and feels, to create a piece that is at once beautiful and intense. It is deeply complex in structure and execution, without sounding like it.

And in an age where much of the experience of listening to music has been stripped down to a click of the mouse button, the packages for Zorn's albums—done by the ever-superb Heung-Heung Chin—continue to enhance the delights of the music within. While somewhat pared down compared to other recent Tzadik releases, it's interesting to note the allusions to Gurdjief within the packaging here. For instance, the inset within the package arranges the musicians and song titles around an Enneagram, a nine-pointed mystical symbol linked to both Kabbalistic and Sufi traditions. The title itself, In Search of the Miraculous, is also the name of a book on Gurdjief's teachings, while the subtitle, Hymns, Prayers and Sacred Dances, bares a close resemblance to a collection of Gurdjief's music released as Chants, Hymns, and Dances (ECM, 2004). The song titles of both Gurdjief and Zorn also often refer to magicians, ritual dances, and ancient tomes of knowledge.

In a year that found Zorn release no less than 12 albums in 12 months, this was one that stood out. Some may find it difficult to embrace the mystical/minimalist aesthetic captured here, but there is so much art present. For Zorn as a composer, the writing is an important step in the development of his file card music. For the musicians, the songs contain deeply passionate performances that sound effortless, even where they are certainly not. And for the listener, there are pleasures to be found either just in listening or in trying to unwind some of the layers within this suite of music. This is simply an album to lose oneself within.

Tracks: Prelude From a Great Temple; Sacred Dance (Invocation); The Book of Shadows; Affirmation; The Magus; Hymn for a New Millennium; Journey of the Magicians; Mythic Etude; Postlude Prayers and Enchantment.