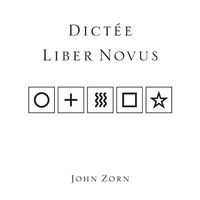 If the ever-productive multi-instrumentalist John Zorn's compositional oeuvre yields one simple theme, it is the sheer variety of his interests and vision. Perhaps none of his personal oeuvres better encapsulate this than his file card compositions. These are usually extended pieces that consist of a vast number of diverse musical ideas, written down on file cards, which Zorn then cuts between in the studio, often at a rapid pace. Some of these "scenes" last only a few seconds, while others develop slightly longer. Between the high-speed cuts from idea to idea, the fact that the pieces frequently make artful use of sound effects, and the deep and ever-changing use of texture and soundscapes, listening to these compositions is can be equated to watching a movie through the ears.

There is often some level of tribute within the file card pieces. Spillane (Nonesuch, 1991) and "Godard" were musical reflections of the art made by film noir author Mickey Spillane and director Jean Luc Goddard—through Zorn's unique mirror. The Bribe (Tzadik, 1998), a kind of sequel to Spillane, and the earlier Deadly Weapons (Nato, 1986) collaboration illustrate the development of Zorn's film noir aesthetic. The Naked City superband employed similar ideas in many of their hardcore mini-tunes, and Zorn's Big Gundown (Tzadik, 1986) tribute to Ennio Morricone also featured file card ideas.

The form allows Zorn to toy with traditional genres without constraining himself to one. Cutting at high speed between saloon-style country & western, hardcore metal, and lounge jazz enables a vast span of ideas to be used as source material, which in turn can be arranged by the composer into something unique with personal context, much in the manner of a director in the cutting room. Yet in recent years, Zorn has seemed to move somewhat away from the file card compositions, with greater emphasis on projects such as his hardcore Moondchild bands and his melody oriented Masada songbooks. 2009, however, saw the release of Femina (Tzadik, 2009), a new file card piece paying tribute to women in art and life, which pushed the boundaries of the medium even further, and met with considerable acclaim.

Now, a year later, with Dictée / Liber Novus, Zorn presents two new file card compositions, one dedicated to Korean-American writer Theresa Hak-Kyunch Cha and the other inspired by Carl Jung's dream explorations chronicled in his Red Book (Liber Novus or "New Book" in German). With both compositions, Zorn seems seem less interested in cycling through "traditional" genres, as he did to an extent on earlier recordings like Spillane and Naked City (Nonesuch, 1990). Different sections suggest echoes of composers such as Morton Feldman, Meredith Monk or avant-garde film director and film composer Alejandro Jodrowsky—and also demonstrate the vast influence of East Asian culture on his aesthetics. But perhaps more than ever before, each distinct section of music also seems more distinctly and personally "Zorn" in its defiance of easy classification or musical norms.

Particularly striking is the truly remarkable and artful use of sound effects, samples and electronics. On "Dictée," the crumpling of papers, the rhythmic clicks of a typewriter, and (appropriately enough) the hum of a movie projector all create tangible mental images from which each ostensible scene grows out. Nature—the sounds of birds, wind, and water—also plays a large part. These effects create a sense of peace when blended with the lush sensuality of voice, which drifts in and out with haunting snippets of Korean and French. By contrast, "Liber Novus" is more discombobulated—a series of scenes cut out of the nightmares and fantasies of fever dreams.

The transition between compositions is brief, almost perfect, but the difference between them becomes rapidly clear. Perhaps because of the source material that is Jung's Red Book, the composition is more chaotic. The animals in "Liber Novus" hiss, roar, snarl and squeal, and John Medeski's ethereal organ casts a surreal pall. Zorn provides brief snippets of German narration, and the chanting of Buddhist temple monks is employed amidst alternating swaths of exotica and peals of electronic craziness. It encapsulates a kind of daunting mystical search for self, with a distinct sense of motion through strange and unusual levels—a kind of sonic pathway up some imposing Holy Mountain.

Perhaps more so than any of his other work, the file card compositions give Zorn the chance to be himself. Longtime listeners will recognize certain distinct flourishes from his earliest works—the sudden interruption of a section with a scream, as well as numerous Game-piece-style downbeats of vibes and electronics signaling a scene change. The exotica and 1970s instrumentals that have characterized Zorn's recent work make appearances in some beautiful solos by Sylvie Courvoisier on piano, Kenny Wollesen on vibraphone, and Ned Rothenberg on bass flute and shakuhachi (a traditional Japanese end-blown bamboo flute). One particularly striking flute theme from earlier shows up later on cello, providing a certain continuity that isn't always present in Zorn's work, almost in the way of Feldman's "Rothko Chapel." Yet in contrast with classical minimalism, these pieces are in perpetually motion and metamorphosis. And potentially lost amidst the many unusual flairs of the music, as in the most suspenseful films, are their delicate use of dynamics and tension.

If there is any complaint here, it is the brevity of the two compositions, which combine to clock in at just under 40 minutes. It has a great staying power that leaves listeners wanting more, even as they try to understand the extent of what they heard. Like a great film that lingers on the eyes after the projector is long off and the theater has emptied, the music persists even in the absence of traditional form or melody. While there is likely some improvisation in the course of the individual scenes, it would be a mistake to call this "jazz." The art springs out from the arrangement and the conception of this music as something new. For adventurous listeners in search of new musical experience, it is an exciting experience that is vast in scope and full of delightful mysteries.