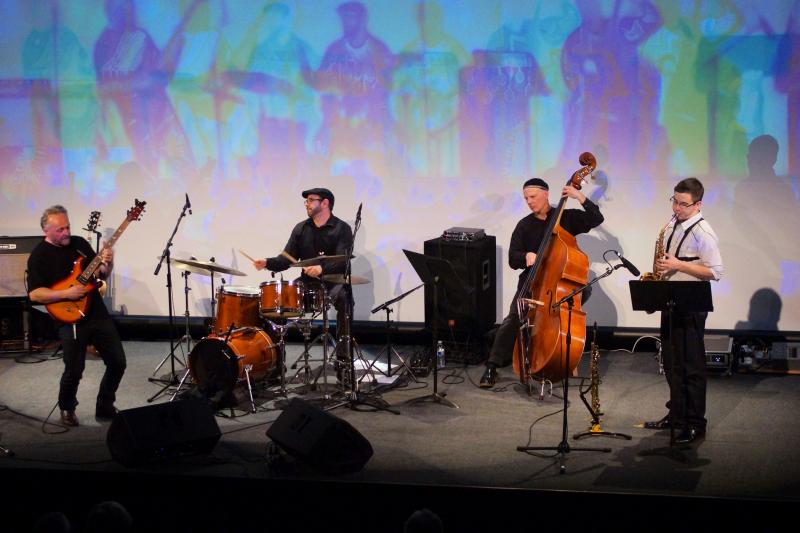 Watching guitarist John Zoltek bound ecstatically around the stage like one of his rock guitar heroes from the '70s, it was perhaps difficult for some in the audience of about 200 to reconcile that only two weeks earlier, his other, dark-side- of-the-moon music persona had commanded a local stage in a radically different fashion. That's when the 57-year old musician, conductor's baton in hand, led his Glacier Symphony Orchestra through a demanding program of classical fare that included Bartok's Piano Concerto No. 3 and Sibelius' Symphony No. 1 in E.

The Woonsocket, Rhode Island-born maestro is a member of that ultra-exclusive club comprised of artists who are equally at home in both classical and jazz idioms. A graduate of Berklee College of Music, where he studied both jazz and classical forms and earned a degree in composition, Zoltek also studied conducting at the Boston Conservatory. In 1996, he was named Music Director of the Glacier Symphony, a community orchestra widely regarded as one of the best among Montana's six symphonies. Since arriving in the state, he hasn't been shy about trotting out his jazz chops, performing regularly with a number of local groups and leading his own combo.

A desire to institutionalize his presence on the local jazz scene led to the creation of "Jazz Night with the Maestro," an annual concert. The event has become a fixture of the local arts scene since it began three years ago with a fairly conventional jazz sextet and a set list that included some standard pop-jazz fare. That group featured the leader's guitar, vibes, drums, bass and saxophone, with a sprinkling of vocals by the maestro's wife. The second edition sported a trio formation, with guitar, electric bass and drums, and a harder, more groove-focused sound. This year, a batch of new original works by the guitarist was showcased by yet another configuration, a quartet featuring double bass, drums and alto sax.

"As a symphonic 'conductor/guitarist,' I have been influenced strongly by both jazz and the symphonic repertoire," Zoltek told AAJ. "But I also have deep roots in rock. Therefore my approach to composing for this particular quartet setting starts with guitar generated riffs and harmonic concepts. I then take this raw material, fashion it through a prism of eclectic influences, and arrange the results into loose and free forms sometimes allowing for solo and group improvisation."

Two nights of concerts at Whitefish, Montana's O'Shaughnessey Center, a performing arts venue, explored Zoltek's blending of '70s-era jazz-rock, fusion, "free" and other contemporary styles. The 15-tune set list included recent works based on Montana- centered themes as well as older compositions that have evolved over time. One was hatched almost four decades ago in a Berklee classroom as a project in trombonist Phil Wilson's composition class.

With a heavy dose of tremolo shaping the sonic personality of his 1982 Gibson ES 175, Zoltek and the quartet treated the audience to a variety of moods. "Geographic Traffic," with a finger-snappin' groove hammered out by Adam Greenberg, one of Montana's first call drummers and a big band leader in Bozeman, boasted a smooth jazz-style vamp. "Metaphorical Recess" reveled in its neo-bop lineage, while "Drift" featured a wistful soprano sax solo by Dan Rose, a product of the University of Miami's Frost School of Music. A promising up-and- coming sax talent, Rose's command of the alto, his primary instrument, and ease with Zoltek's modern language earmark him as a young jazz artist with a serious upside. "You Groove Me," true to its title, strutted with a loose-limbed rhythmic approach and funk-jazz buoyancy. Journeyman bassist Paul Faessel, who studied with Oregon's Glen Moore, adroitly adapted to every stylistic curveball, exhibiting a wide range of skills honed through performances with the Glacier Symphony, Cocinando Latin Jazz Orchestra and other area jazz-oriented ensembles.

Only on several ballad-oriented trio outings did Zoltek and his rhythm section lose their edge. While providing a brief respite from the overall high energy generated most of the night, tunes like the melodically amorphous "Amethyst" were not compelling enough to keep the audience fully engaged. With an ambitious two hour program of all original works, it's not surprising that not every performance resulted in a home run or even a three base hit. There was, however, a precise method to everything Zoltek and his musicians created that night.

"I imagine some of these pieces as unified arcs evolving from set themes, not unlike the development of symphonic ideas," he commented to AAJ. "The tunes are at times harmonically driven or driven by a dominant ostinato idea. I try to avoid strict jazz or rock clichés and attempt a melding of the two genres into a style that can be appreciated by both jazz and rock audiences. My aim to present music that is free from a dependence on technical maneuvering and calculation. Strong thematic identity and freedom for spontaneity and cathartic feeling is what matters most."

As the audience rose in unison for a well-deserved standing ovation, a favorite quote by Jim Hall crossed my mind. "Improvisation is just a form of self-expression and it's very gratifying to improvise in front of people," the late guitar legend told journalist Whitney Balliett for a 1975 article in New Yorker Magazine. "I feel I'm including them in what I'm doing, taking them someplace they might like to go and haven't been before."

On that fresh spring evening in northwest Montana, the John Zoltek Quartet took its audience on a wide-ranging aural tour of places many of them had never been. For many, it's a trip they'll be eager to take again.