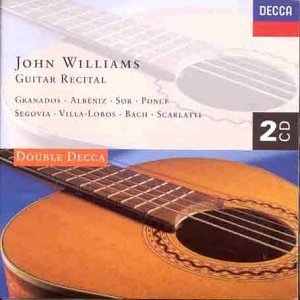 In 1958, guitar virtuoso John Williams was a gifted teenager, and had studied with Andres Segovia. In that year he recorded an album of primarily Segovia-inspired (or themed) compositions from the growing classical guitar repertoire. The album, Guitar Recital (originally released on Delyse in 1959), was in two volumes, though the sessions were continuous. (The album has since been released by Decca). It does not contain the most well-known classical guitar pieces. Instead, Williams played a number of beautiful shorter works and many songs, by composers from Mexico's Ponce (arranged by Segovia) to Duarte and his brilliant Variations on a Catalan Folk Song Op 25, the "Canco del Liabre," as well as transcriptions of two of Bach's cello suites, and a piece each by the two Scarlattis. The latter pieces, originally mixed in the track order with the shorter works, have since the early 1970s been released together on one disc as half of the two disc set. This review focuses exclusively on the shorter song-like works, and their connection to popular music.

In these recordings, the beauty and elegance of the pieces are perfectly realized by the musician—the playing is extraordinarily fresh and upfront, doing much to convey the intricacies of the music. There is almost a rock feel to some of the album, except that the notes are of course wonderfully interwoven in a way hitherto unknown in popular guitar music. Williams' feel here is different to the more neutral playing that is often a feature of his later recordings.

The link to later popular music is easy to see: flashes of the Beatles, Burt Bacharach, other 1960s music and even Jim Croce in the 1970s, greet the ear as Williams takes to the music the raw energy of someone on the way up. A classic example is a section of Duarte's "Canco Del Liabre," when Williams plays the composer's relatively straightforward chords that end the music: the ending sounds like the guitar on an acoustic track from the early Beatles, and there is even an "And I Love Her"-like tierce de picardie (a minor to major chord finish) to complete it.

To understand the likely historical importance of this music for popular music, it should be stated that it is easy to imagine the influence of it on people like George Harrison and the other Beatles—Harrison was a Segovia aficionado early. The eighth piece, by Segovia himself, is entitled "Estudio" ("Study")—it may be that the Beatles took this general instruction literally.

The album begins with Albeniz's "La Torre Bermeja." The scenic chords take you to twentieth century popular music territory, and a rocking melody has the feel of a singing group's chorus. The succeeding minor chord touches veer towards Cole Porter (who was no stranger to occasionally form borrowing from classical repertoire). But the most stunning feature of the piece is probably the tone Williams extracts when briefly playing harmonics. Though it begins in a "familiar" classical guitar manner, there is enough here to attract many popular musicians as well as classical listeners.

Williams next moves into pure song, with three Mexican songs by Ponce (author of the famous "Estrellita"). The arrangements are by Segovia, and though they are in the key of E major, the effect is bright, as if they were in D major. In the third, ("La Valentina"), there is a sound link to Harrison's "Here Comes The Sun" (a very sunny use of D), with the tune using the familiar Mexican broad "major third" melodic elements (as does "Here Comes The Sun"). The second, "Por ti mi corazon," is a slow tune, with some clear Beatles-like chords that must have begged a later writer to use them, or something similar, under a vocal tune. The progressions have great beauty. The opening of the melody is similar to a well known carol.

Villa Lobos then enters with his more somber "Etude in E minor"—another attractive aspect of the album's selections is their ready transference to rock guitar, simply because of the keys. An untrained player can "fake" a classical "effect" easily in E minor, or adapt parts of it into his own music.

Gomez Crespo's "Nortena" is rich in Beatles and perhaps Croce-like touches. The opening is in effect Debussy's "La fille aux cheveux de lin," and then there is a deft swish of wonder as the tune twists. Knocks on the guitar follow, and the world of later acoustic rock, albeit very fine examples of the genre, are felt. The Beatles White Album (EMI, 1968) has similar sounds. Yet the music goes beyond Beatles melody, and becomes so involved that Django Reinhardt and Bacharach may seem audible. Williams' open touch is perfect to communicate all this. The harmonics later in the tune even convey a feel of 1930s Duke Ellington.

All these pieces lead up to Duarte's tremendous "Canco Del Liabre." In several brief sections, the piece rapidly accelerates to a stadium-filling climax as the guitar rises to sound like an orchestra. Duarte (the name is Portuguese) was an English composer whose only formal lessons were in jazz guitar. He also worked as a jazz musician, and had a long friendship with Segovia himself.

The third part includes melody similar to Paul McCartney's "Here There And Everywhere," and ends with White Album-style Harrison chords. Other sections appear to travel near Michel Legrand and even acoustic Led Zeppelin. The final section, before the magnificent guitar "chorus," briefly echoes the dueling banjos theme.

This was music ready to be plundered, in some way, on the stormy Spanish Main of musical borrowing. And it was, and to very good effect.

After Fernando Sor's "Variations on a Theme of Mozart" (Op 9), the shorter compositions return. Segovia's own "Oracion" and "Estudio" appear, no doubt providing the master with some composer royalties.

Madriguera's "Humorada" then arrives, opening in a way faintly similar to McCartney's "Blackbird." Tansman's "Barcarolle," arranged by Segovia, brings to mind "If I Say A Little Prayer" in its opening phrase, while the rocking riff separating the piece's first sections is quite similar to the opening of alton saxophonist Cannonball Adderley's famous version of "Autumn Leaves," recorded with trumpeter Miles Davis on his Something Else (Blue Note, 1958) album. This piece is a world of its own, and has surely led to, knowingly or not, much great later music. Tansman was a Polish-French composer, and the piece is form his suite "Cavatine" (1951). Tansman also wrote as a jazz composer, though under another name. As with Duarte's piece, the "Barcarolle" brings to the classical area a jazz-influenced (and jazz-playing) composer.

Granados' "La Maya De Goya," arranged by Llobet, has interesting contrasts between bass passages and the higher notes, and includes a neat, if somewhat obvious, cadence—an ending to a musical line—that is identical to that in the tune of the Beatles' "Wait," from Rubber soul (EMI, 1965). A second Beatles aspect is the very interesting next section of the piece, which paraphrases the opening bars of "She Loves You," and then echoes the Gillespie-Coots song "You Go To My Head" on another cadence. Towards the end, an astonishingly fast passage leads two melodic bars that later appeared in McCartney's "And I Love Her," and, for that matter, also in the middle section of George Gershwin's "Liza."

This is of course Granados, a master composer.

The final piece is by Lauro, his brief "Valse Criollo," a well-known lilting waltz with rising melody.

Paraphrasing the title of Weber's famous piece, this album is simply an "invitation to the song." The finesse of the pieces themselves, and not just the playing, is magical. The album certainly charts very well the Segovia revolution, the introduction of the classical guitar to the mainstream concert repertoire. It also provided much for the revolution to come in popular music, and the invitation was certainly rapidly taken up. Guitar Recital is a revealing contrast to John Williams' well known classical guitar repertoire. The march to rescue modern music may start here, again.