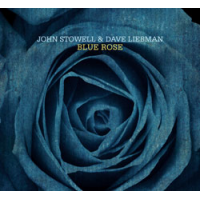 In the search for enriched jazz expressiveness, the duet format has been revived, giving the musicians greater space for improvising than a larger group and avoiding the overpowering influence of a rhythm section, while affording an opportunity to engage personalities and "swap notes" with another whose ideas and style are of special interest. Iconic saxophonist Dave Liebman, who thrives in just about any kind of ensemble, recently made a duo recording with pianist Marc Copland (Impressions, hatOLOGY, 2011), which he now follows up with this CD with guitarist John Stowell. Both Copland and Stowell, like Liebman, adhere closely to the modern jazz idiom while at the same time invoking their own highly evolved vocabulary. Liebman, whose prolific recording output has covered every change in jazz since he began his career in the late 1960s, has always made superb (and sometimes groundbreaking) choices of collaborators (such as pianist Richie Beirach, guitarist Vic Juris, drummer Billy Hart, and bassist Drew Gress). This time, however, it was Stowell who initiated the duet idea with Liebman.

The album title betokens the nature of the music: beautiful standards (roses) with a contemplative, sometimes melancholy tone of longing. Liebman is a self-described "post- Coltrane" saxophonist. Like John Coltrane, he is known for his relentless, almost frenetic improvising that pushes the limits of harmonics and sonorities with the aim of full emotional expression and intensity. However, like Coltrane, Liebman has a more reflective side which manifests in his ballad playing. This album manifests the "gentle side" of Liebman as Coltrane did on The Gentle Side of John Coltrane (Impulse, 1975), as well as John Coltrane and Johnny Hartman (Impulse, 1963), and Duke Ellington and John Coltrane (Verve, 1963), the latter a quintessential duet recording. Stowell's guitar provides a perfect foil for Liebman's quieter approach. Rarely since Charlie Byrd have we heard such sensitive use of the guitar, which practically lost its identity when it was electrified.

The album begins with the title tune, a lesser-known Duke Ellington composition that sets the stage for an album that is infused with Ellington's temperament. Following Stowell's opening motif that quotes the first four notes of Miles Davis' "Milestones," Liebman states the melody on soprano saxophone, then adding an extended sequence of improvised choruses that could have easily been fingered by Ellington on piano. Stowell, apart from a brief solo, stays mostly in the background, comping for Liebman with rhythmic pulsation and melodic counterpoint.

Liebman's tenor sax playing on Wayne Shorter's "Fe Fi Fo Fum" is in a "Parisian" blues mode that Shorter gave up soon after he started playing at Birdland with Art Blakey. Liebman renders the tune less like Shorter and more like Paul Desmond, who used the term "dry martini" to describe his sound. Liebman plunks an olive into the drink, while Stowell solos in the tradition of Kenny Burrell, amounting to a nostalgic trip down memory lane.

By contrast, Billy Strayhorn's "Isfahan" (sometimes attributed to Ellington, as were many Strayhorn compositions), is rendered in a playful and experimental manner. Stowell begins with an extended rubato solo and moves to co- improvising with Liebman, who gives the nod to Ellington's great alto saxophonist, Johnny Hodges. Included are some smokey low-register pianissimo passages. Liebman expresses the mood changes with various saxophone sonorities, some of which will surprise the listener.

In Cole Porter's "Everything I Love," Liebman sounds almost like his friend and Pocono Mountains neighbor, Phil Woods. Liebman's hints of players like Woods, Desmond, and Hodges suggest that he wants to conjure echoes of the transition from swing to bebop in his playing. One can't help thinking he has a philosophical intent, although in truth no specific ideology is implied, and the emphasis throughout is on developing the expressive implications of each tune.

In Bill Evans' "Time Remembered," the master saxophonist takes a creative turn on piano. Early in his career, Liebman studied with Lennie Tristano, and, in addition to highlighting Evans' impressionism, there are echoes of Tristano in Liebman-the- pianist. In particular, Liebman's use of dissonance and clusters is attributable to Tristano, a great pianist whose hyper-modernism left him outside the pale of popular pianists but made an indelible impact on the jazz idiom.

Antonio Carlos Jobim's gem "Until Paisagem" is done gracefully and sweetly, with Stowell providing the bossa nova rhythm in a manner strongly reminiscent of Charlie Byrd, who made the earliest American bossa nova recordings with Stan Getz. Liebman chooses not to "Americanize" the bossa nova as did Getz. Rather, he captures the styles of the Brazilian vocalists and of the composer Heitor Villa Lobos. This is a delicate performance true to the Brazilian roots.

Joe Farrell, an influential tenor player with such bands as those of Maynard Ferguson, Charles Mingus, Elvin Jones, and many others, is still another saxophonist referenced by Liebman. Farrell's composition "Molten Glass" allows Liebman to exploit embellishments and sonorities to maximum advantage. Here, as on other tracks, he makes rich use of the low register whispering sound. Stowell backs Liebman with a Bach-like linear development, which Liebman almost disrupts at one point with rapid phrases of the kind which appear in Bach, but of course not in so quite a jazzy way.

On the standard "My Ideal," Liebman really sounds like Johnny Hodges, invoking the latter's accentuation of a slight upward glissando. (Hodges famously recorded this tune with the Lionel Hampton Orchestra.) Stowell walks gently with Liebman, as the nostalgia reaches its denouement in a flashy Liebman cadenza.

Trumpeter Kenny Wheeler's "Everybody's Song But My Own," is a funk-waltz which only a trained dancer could possibly execute. The tune stimulates fine and subtle co-improvising in which Liebman's soprano saxophone is whimsical and playful in contrast with Stowell's dense progressions. Somehow, the disparity meshes very well, a study in the attraction of opposites. Another Shorter original, "Black Eyes" proceeds with a largo intro with sonorities of the wood flute and lower pitched strings and tone clusters of the acoustic guitar. The duo then breaks out into a Latin rhythmic vogue, with more of a nod to Shorter's tenor sax playing than on "Fe Fi Fo Fum." Liebman finalizes the piece on the wood flute, vividly evoking the African plains.

For a brief finale, Liebman returns to the piano for "How Deep Is The Ocean," joining Stowell in the bebop mode of using the chords with minimal emphasis on the melody. The piece ends rather than begins with the statement of the melody.

The Blue Rose album understates Dave Liebman's improvisational rapidity and brilliance, but on its own terms it constitutes a superb collaboration with Stowell's guitar artistry that echoes many of the great players and idioms while at the same time providing a reflective, expressive evocation of quieter moods in the musical repertoire, with Ellington as the godfather, and the classical composer Debussy as the originating master of impressionism.

Blue Rose; Fe Fi Fo Fum; Isfahan; Everything I Love; Time Remembered; Until Paisagem; Molten Glass; My Ideal; Everybody's Song But My Own; Black Eyes; How Deep Is The Ocean.