Far too often in jazz, a musician posing as a songwriter decides to immortalize a catchy sequence of notes or simple chord progression by inverting, converting, coloring, varying, flipping and reformulating it. But however dazzling is the musicianship, the acrobatics are not to be confused with composition. Saxophonist Branford Marsalis states unequivocally, "One of the problems I have with a lot of today's jazz is the lack of melody and overemphasis on harmonic associations. To put it unkindly, too much jazz writing has degenerated into the technique of looping where a sequence of notes is introduced and repeated ad nauseam; chord and key modulations strictly verboten. And no matter how inventive and even deeply felt is the improvisation, all the harmonics in the world will not relieve a monophonic Drone & Variations of its monotony.

Fighting upstream against this tidal wave of mono-tonality is the music of pianist John Roney who, for the most part on Rate of Change (Effendi, 2006), avoids the easy write and pitfalls of being fluent in the language of music. Despite his youthful age (he just turned thirty), Roney is able to make his sensitivity and world view the substance of his playing and especially unassuming songwriting that, from one track to the next, reveals his natural reticence and vulnerability.

He instinctively stays away from the flourishes and arpeggios associated with the lush sound that is often soulless and depersonalized, because keeping it straight and simple best guarantees the transparency that is the affecting issue of his music. And while his improvisation rarely astonishes, throughout Rate of Change there is an abundance of fecund moments when partially disclosed meanings or moods suddenly congeal into the articulations we associate with style: those DNA-like intervals the musician forges as he transforms his experience into art. No surprise that he has been quarterbacking the Montreal Jazz Festival's late night jam sessions for the past few years, and has recorded on Montreal's distinguished Effendi label—that, for the most part, will have no truck with lightweight fusion's heavyweights.

One of the first things that strike a note with Roney's music is that it is informed by his background in bebop and classical. "Piano Segue not only pays tribute to Romanticism (Beethoven, Chopin), but what the era stood for: composition whose cathedrals continue to tower over everything else. Like the classicists, Roney aspires to make his inner voice and vision reflect life's largest categories, which oblige him to create structures that can support and cohere a complex range of feelings and impulses. He achieves this by discovering in the infinite permutations of music a particular cadence and scale that defines him in his encounters with the world. What emerges is the voice we recognize as John Roney's.

Listeners who have long felt cheated by jazz's dereliction of compositional duty will be rewarded by Roney's dedication to the blood, sweat and ears required of song writing. In Rate of Change, we have a pianist whose personal vibration and expressive operations combine to create music that does honor to the life that that has been lived and contemplated, for audiences for whom his music articulates what would otherwise remain unexpressed. Such is the power of creation, and if a few of the tracks on Roney's highly recommended CD fall short, it is because he has aimed high.

In the probing, introspective, sometimes wistful journey that characterizes Rate of Change, Roney is greatly abetted by his exceptional drummer, Jim Doxas, who, through the power of his startling invention, makes the case that percussion can be every bit as performative as a lyrical instrument. He achieves this result on a minimalist drum set because he possesses a maximalist imagination. 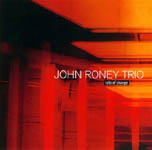 What distinguishes Doxas's approach to improvisation is that he refuses to play it safe, allowing the moment—and not received wisdom—to dictate the kind of framework that will contain, shape and guide the piece under consideration. He is astutely committed to the belief that significant music is always distinguished by what it leaves unsaid, the gaps of which inspire him to produce a highly original vocabulary of accents, sound swells and silences that speak to his keen ear and very special touch. Unlike most drummers, he's able to personally engage an audience while leaving the group dynamic intact.

And if he has caught the full-time attention of piano great Oliver Jones, it's because he is able to flawlessly negotiate the demands of tempo and concept by supplying a structure of sound that may completely recast or resize a song or section of it, which he then colors and fills in: the effect is nothing less than edifying. Even when producing a whisper on the cymbals, the perfectly weighted sequence of taps attains the breadth of the human voice. Doxas persuades us that percussion can flow like water, sometimes like water over sharp rock, like ice fog over freezing water or a gentle breeze cooled off by water.

He epitomizes the bold and inventive drummer who isn't afraid to go out on a limb where he risks losing it on occasion. What more can you ask of a percussionist than to reveal the potential of his instrument so the listener leaves wiser and with whetted appetite.

With Rate of Change, John Roney has significantly raised his profile. Whether or not he'll catch the long-term attention of critics south of the border or merit comparison to pianists such as Brad Mehldau, Ethan Iverson and Uri Caine, remains to be seen. Such a desired and not undeserved outcome might very well depend on what we get next from a composer who has found a way to make his person and persona one and the same, and who understands that staying focused on his considerable gifts—and not the game—is what making music is all about.