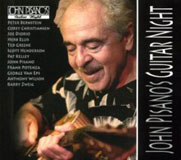 In 1997, guitarist and entrepreneur John Pisano convinced a Los Angeles club owner to allow him to promote a series of jazz guitarists, who would perform on a weekly basis, with a different artist appearing each week. The debut of this series began at Papashon's and was later moved to Donte's (now long shuttered). The weekly event is still going strong almost ten years later, currently at Spazio's. Pisano has been providing the guitarists who work in this setting as a cooperative rather than competitive event.

This two disc package from Mel Bay Records is a marvel of mainstream jazz guitar. Recorded over the past ten years live at these Guitar Nights, it offers a fascinating display of talent and collaboration among the players. The very first track is "I'll Never Be the Same," and was recorded at Papashon's on the very first Guitar Night. It was fitting that the master of the seven string guitar, George Van Eps, who passed away shortly after this recording was made, plays in duet with bassist Luther Hughes. Guitarist Herb Ellis is then heard with Pisano and a rhythm section on "The Blues," and then more heatedly on "I Want to Be Happy.

Subsequent tracks present a series of solo, duo with bass, or trio with bass and drums, for a roster of plectrists, some of whom are well-known, while others are more obscure. In the first category, consider that Anthony Wilson, Frank Potenza and Larry Koonse represent some of the best guitarist from the West Coast, while Peter Bernstein, the able New York guitar slinger, is also aboard. Veteran Joe Diorio performs a splendid "Round Midnight," while Ted Greene dazzles with his solo version of "When Sunny Gets Blue. Pat Kelley and Barry Zweig more than acquit themselves, with their respective work on "Minor 6th Sense" and "Falling In Love With Love."

The bop standard "Wee," from jazz educator Corey Christiansen, more than ends this package on an up note. The only damper on this fire is the inclusion of fusion guitarist Scott Henderson for his version of Wayne Shorter's "Footprints," a cold metal take of this jazz standard. In comparison, when Henderson concludes his solo and hands it off to John Pisano, it sounds like the Seventh Calvary has arrived. In the perspective of all of this swinging guitar music, it is a small price to pay.

Through it all Pisano, who appears on many of these Guitar Night selections, maintains the sound of a perfect accompanist, allowing his guests their solos, then responding in a reflective and always melodic fashion in keeping with his role as the perfect host.

CD1: I'll Never Be The Same; The Blues; I Want To Be Happy; Good Bait; When Sunny Gets Blue; Rosetta; Whisper Not; My One and Only Love. CD2: 'Round Midnight; Falling In Love With Love; Autumn Leaves; All Of You; I Thought About You; Minor 6th Sense; Footprints; Wee.