By JOHN KELMAN
October 5, 2006
Sign in to view read count 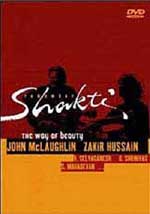 Over the past decade guitarist John McLaughlin, other than working on his Industrial Zen (Verve, 2006) project, has devoted much of his time to a new version of his ground-breaking mid-'70s Indo-Jazz fusion group Shakti. For those unable to attend a Remember Shakti concert in recent years the only way to experience the group in performance was by purchasing Verve's 2002 Remember Shakti box set. In addition to the reformed group's three CD releases the box included a concert DVD culled from the same two nights used for Saturday Night in Bombay (Verve, 2001). The Way of Beauty makes that footage—and a whole lot more—available as a single DVD release and is exciting news for anyone who has followed this remarkable group but didn't want to shell out for the expensive box.

When McLaughlin, at the height of Mahavishnu Orchestra fame in the mid-1970s, found himself with a group virtually imploding after two studio records and one live album, his next step was a move that, at the time, appeared to be completely out of left field. Eschewing electric instruments entirely, he teamed up with a trio of Indian musicians to form Shakti, one of the first world music groups and certainly the first group to bridge not only the gap between Eastern and Western musical concepts, but North and South Indian music as well. While the group recorded three albums between 1975 and 1977, and live performances were always met with great enthusiasm, the record buying public had a difficult time reconciling themselves with this curious hybrid. Certainly the record company had no idea what to do with it. And so, while Shakti represented a fearless exploration that broke down all kinds of musical boundaries, the group never achieved the degree of critical and popular acclaim it deserved.

Probably the most important result of the group's relatively short existence was the musical and personal bond formed between the British guitarist and tablaist Zakir Hussain. Shakti may have disappeared in the late 1970s, but McLaughlin and Hussain would continue to cross paths over the years, most notably on Hussain's superb album, Making Music (ECM, 1987). It was also on that album that McLaughlin was introduced to Indian flautist Hariprasad Chaurasia, and it was that trio, along with original Shakti percussionist T.H. Vinayakram, who would reconvene in the mid-1990s, under the name Remember Shakti.

While Chaurasia and Vinayakram would leave after the tour that resulted in the double live Remember Shakti (Verve, 1999), the group continued on with new percussionist V. Selvagahesh and the remarkable U. Shrinivas on mandolin. This quartet would release The Believer (Verve, 2000) and, finally, Saturday Night in Bombay, featuring the core quartet with a bevy of guest musicians from India. While the group, with added vocalist Shenkar Mahadevan (who first appeared as a guest on Saturday Night in Bombay), continues to tour sporadically, there's been no new material from the group.

Until now. The Way of Beauty is a sweeping three-hour DVD that, along with the concert footage from the Remember Shakti box, includes an informative one-hour documentary featuring substantial interview footage with the current members of the group. Equally revealing are three bonus features—70 minutes of additional concert and sound check footage from both the current group and the original Shakti from 1976.

What stands out the most about the documentary is just how deep the relationship is between Hussain and McLaughlin. They refer to each other as "soul mates, a term normally associated with romantic relationships, and watching them play together, the connection is palpable. This may be a different kind of love, but it's love nevertheless. While both musicians, and the others who play with them in Remember Shakti, are stunning virtuosos, what's equally clear in both the interview and concert footage is the respect and open-mindedness everyone shares. Remember Shakti's music often revolves around long improvisations that are cued out by frighteningly fast musical figures seeming to come out of nowhere, yet this is a group of remarkable synchronicity. There's an uncanny sense of telepathy at play, and the kind of serendipity that occurs only when musicians are playing with ears wide open along with a rich command of musical language that transcends genre stereotyping.

What's also clear is that, while everyone gets the opportunity to demonstrate their seemingly endless flow of ideas, they group's approach is also egalitarian and mutually supportive. During Shrinivas' "Giriraj Sudha, the first piece in the Live in Bombay concert, McLaughlin does little other than trigger a soft drone with his laptop and join in on the occasional restatement of the theme. The rest of the time he is engaged in a rhythmic hand motion that's as much visual as it is occasionally percussive. The connection between Hussain—who has since evolved from playing strictly tablas to adding additional percussion and cymbals—and Selvagahesh is equally empathic, the two seeming to intuit complex rhythmic figures on a subconscious level.

The documentary provides historical context on the emergence of the original Shakti and its inability to find its niche at the time because it was, frankly, ahead of its time. It also explains why the reformed group had to be called Remember Shakti. It's a very different band and the concepts are much more evolved. With McLaughlin introducing modern technology to the group, and even Shrinivas and Mahadevan using some signal processing, Remember Shakti is a considerably more modern group than its predecessor. Shakti may have broken ground in its finding cultural nexuses, but Remember Shakti takes that concept and updates it, without ever losing the sense of history behind the music.

Additional concert footage sheds further light on the evolution of the group. A 15-minute clip from Shakti's 1976 performance at Montreux, playing "Joy, from their first release, couldn't be more aptly titled. And while a 10-minute 2004 Montreux clip of Remember Shakti shows just how much the group has evolved, the 45-minute sound check footage from a 2004 Paris show sheds, perhaps, the most light on the group and how it works from an insider's perspective. It also demonstrates how, while an audience can create energy that pushes artists to greater heights, when you have a group of musicians such as these who clearly love playing together, even sound checks can yield thoroughly exciting results.

McLaughlin continues to pursue a wide variety of musical avenues including his outstanding fusion release, Industrial Zen (Verve, 2006), but in many ways Shakti and Remember Shakti appear to have provided the most pure and joyful musical experiences of his career. Certainly the concert footage finds McLaughlin in incredibly high spirits, not only with respect to his own playing, but in his appreciation of those around him. There are even times when he seems to be shaking his head in amazement to find himself in the center of such a remarkably creative and dynamic energy field.

Experiencing The Way of Beauty you may well find yourself shaking your head in amazement as well.