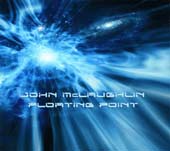 While the term fusion has long been associated with the specific fusing of jazz and rock, ever-shrinking distances in the global community has led to viewing the term as much more all-encompassing. Few have been as successful as guitarist John McLaughlin at bringing together a lifetime of voracious musical interests into new contexts where the whole truly exceeds the sum of its parts.

Amongst the guitar icon's many pursuits has been a lifelong fascination with Indian music, which began seeping into his own work as early as My Goals Beyond (Ryko, 1970), but became increasingly evident throughout the first two incarnations of his groundbreaking Mahavishnu Orchestra. Still, it wasn't until Shakti (Legacy, 1976) that McLaughlin truly began finding ways to fuse the more linear, rhythmically challenging music of India with the jazz-centric western harmonies he'd honed on projects like Extrapolation (Polydor, 1969) and work with another legend, trumpeter Miles Davis, on albums including the vastly influential In a Silent Way (Legacy, 1969).

Both the original Shakti and reformed Remember Shakti, which released three albums at the turn of the millennium including the sublimely stunning The Believer (Verve, 2000), were largely acoustic affairs, increasingly approaching western harmony and including some electronics, but with a primary emphasis on the Indian tradition.

Floating Point, recorded in India during an eight-month stay there prior to unveiling his newest touring group, The 4th Dimension, for its Fall, 2007 North American tour, reverses things completely. Incorporating Indian melodic concepts into a decidedly harmonic/changes-based affair, McLaughlin brings together a mix of western musicians including young electric bass phenom Hadrien Feraud—whose playing on The 4th Dimension tour and his 2007 self-titled Dreyfus Records debut demonstrate another legend in the making—and a collection of Indian musicians who may have never played this kind of music before but, as the guitarist said in his 2007 AAJ interview, ..."they don't have the training; but I know how to set up some harmony where they can just go on their ragas and everything works out fine."

McLaughlin further describes the session for Floating Point, "What amazes me, whether it's west or east, are the young musicians coming up who are really outstanding. This makes my heart warm, as they say, because on a recording I did in India, for example, I used all Indian musicians, but there was a rhythm section, all Indian musicians playing western instruments, who were just killing."

Along with Feraud, McLaughlin's core group includes keyboardist Louiz Banks, drummer Ranjit Barot and percussionist Sivamani, three players from India who propel Floating Point with a combination of rock-edged western backbeat and complex eastern polyrhythms. Those fortunate enough to catch the 4th Dimension tour will be familiar with three of Floating Point's tunes—the frenetic "Raju," taken at a slightly slower pace than on the tour; the balladic "Maharina," sporting a far busier pulse; and the closing "Five Peace Band," another burner originally performed by Shakti that is essentially a blues, twisted on its side by McLaughlin and featuring one of his most fervent solos of the set.

Guests, including saxophonist George Brooks, vocalist Shankar Mahadevan and, in particular, bamboo flautists Shashank and Naveen Kuma—who take the instrument to places it's never been before on the viscerally funky but high velocity "Off the One" and breezily optimistic "14U" respectively—prove that the line where Indian traditionalism and western harmonies meet can, indeed, be fluid. In many ways the very logical follow-up to Industrial Zen (Verve, 2006), Mahadevan's expressive singing on Floating Point's aptly titled "The Voice" draws a clear line to Industrial Zen's "Dear Dalai Lama" and "Mother Nature," on which the vocalist also appeared.

Like his reformed Mahavishnu of the 1980s, McLaughlin plays more guitar synthesizer here than the conventional electric instrument, but his palette has grown substantially, and ongoing improvements in technology make his synth work on Floating Point feel far more organic. On the opening "Abbaji"—with Brooks' soprano saxophone and Barot's fiery delivery bearing some comparison to McLaughlin's late-1990s Heart of Things band—McLaughlin's ability to create sounds that are vocal-like in their nuanced expressionism continues another career-defining thread back to the mid-1970s, when he worked with prototypical guitar synthesizers like the 360 Guitar Synthesizer System.

The toughest part of having an encyclopedic interest in music that crosses every stylistic boundary, is the risk of losing focus and a consistent voice. Throughout McLaughlin's five-decade career, he's managed to mitigate such risks by creating music that lives and breathes with his own broad interests. Rather than leaning towards any one discipline (other, perhaps, than being a primarily Western musician, despite his undeniable knowledge of Indian traditional music constructs), as McLaughlin approaches seventy the many markers that have acted as signposts along the way are drawing ever closer together. As the 4th Dimension tour also demonstrated, there's an increasing lyricism in McLaughlin's playing and writing—qualities that have always been there, but seem to be coming out in much greater force in recent times.

One of the most fluent, evocative and powerful albums in a career filled with high points, Floating Point works because, just as he's accomplished in his own career, McLaughlin has brought together a group of musicians for whom much of the music is far outside their comfort zone.

It's McLaughlin's very trust in his musicians' adaptability—the very same flexibility that encouraged Miles Davis to tell McLaughlin to play as though he'd never played the instrument before on In a Silent Way—that makes Floating Point so compelling. McLaughlin's Indian friends may not have jazz in their blood the way it is in the guitarist's, but by approaching unmistakably western-informed music (often written, however, with linear themes that could easily translate to a more Indo-centric approach) with an eastern mindset, they make Floating Point an album that, in McLaughlin's lengthy discography, is one of his most successful fusion records, with the term fusion referencing the broadest possible definition.

Tracks: Abbaji (For Ustad Alla Rakha); Raju; Maharina; Off the One; The Voice; Inside Out; 14U; Five Peace Band.