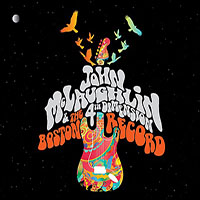 The Boston crowd's roars on this live set from John McLaughlin and the 4th Dimension's 2013 tour say as much about the dazzling interplay of the band as it does about McLaughlin's enduring appeal. For sure, McLaughlin remains one of jazz-fusion's major draws but the acclaim has little to do with nostalgia and everything to do with the excitement that his performances—in whatever guise—generate. This incarnation of the 4th Dimension seems to have inspired McLaughlin to his fieriest electric playing in years, as this recording demonstrates in spades.

McLaughlin has always attracted virtusoso collaborators but in Ranjit Barot, Etienne Mbappe and Gary Husband, he has perhaps corralled his most simpatico fusioneers. The sparks fly from the first industrial riffs of "Raju"; McLaughlin's thrilling solo is the jewel in the crown but it's the quartet's collective verve that seduces. Surprisingly, the 4th Dimension's two studio recordings yield only two selections, both from Now Here This (Abstract Logix, 2012)—the unfettered jazz-rock of "Echoes from Then"—which features a spirited konnakol-cum-drum workout from the dynamic Barot—and the bustling "Call and Answer," a quintessentially electrifying McLaughlin offering where guitarist and drummer lock horns in thrilling exchange.

McLaughlin's back catalogue provides the meat of the material. Three tunes come from Floating Point (Abstract Logix, 2008) while two hail from The Free Spirits band of the early-mid 1990s. The guitarist also delves into Industrial Zen (Verve Music Group, 2006), as well as his wonderful late-1980s/early 1990s trio with Trilok Gurtu and Kai Eckhardt and right back to the Mahavishnu Orchestra's The Inner Mounting Flame (Columbia,1971) Perhaps, like Pat Metheny, McLaughlin feels that now, more than ever, he heads a band with the right chemistry to explore his extensive songbook at will.

On the seductive "Abbaji" McLaughlin is in expansive mood, though there's more soulful blues and greater lyricism in his playing these days compared to the searing metal incantations of the Mahavishnu Orchestra years; Barot leads a vocal call and response of "love and understanding...," the ethos which has long driven McLaughlin's music making. It's an ethos which has seen him—leading by example—perform twice in Ramallah in the past two years in support of NGO Al Mada, which uses art and especially music as therapy for traumatized Palestinians.

McLaughlin revisits his R&B roots on the jam-like "Little Miss Valley," with M'Bappe and the leader particularly inspired. "Senior CS" and "Maharina" provide greater introspection. The former is a delicate duet between McLaughlin and the ever-intuitive Husband, while the latter is a tender ballad with achingly beautiful dialog from the two Yorkshire men. "Hijacked" is another lively quartet romp but the loudest cheers greet the opening motif of the Mahavishnu Orchestra's "You Know You Know" -a slow grooving, nicely edgy blues punctuated by Barot's blistering fills and with a brief nod from McLaughlin to Jimi Hendrix.

"Just getting warmed up here," McLaughlin tells the crowd over the applause, and in truth, a double CD release might have made more sense. Still, The Boston Record perfectly captures the essence of the 4th Dimension—powerful yet lyrical—and serves as a compelling document of a brilliant band.