John Mayall: Live at The Marquee 1969 & The Masters

By DOUG COLLETTE
July 19, 2008
Sign in to view read count
John Mayall had a reputation for being a rebel long before 1969. How else to explain his single-minded devotion to the blues in the face of Beatlemania? Still, in dispensing with a drummer and including no lead electric guitarist in the band he formed for The Turning Point (Polydor, 1969), Mayall was going against the very grain of the blues movement he had helped to establish alongside his illustrious sequence of lead guitarists—Eric Clapton, Peter Green and Mick Taylor. 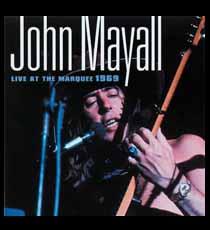 Reaffirmed by dint of the tributes afforded Mayall in the interviews on The Masters (reviewed below), there was, nevertheless, no small amount of respect accorded Mayall at this point by both musicians, media and fans alike. After ever so graciously and professionally introducing his quartet, Mayall and the band immediately illustrate the continuity at work in this new endeavor; and with the hindsight afforded by this archiving, simultaneously hearkens back to the ambition of the previous year's Bare Wires (Decca, 1968) and foreshadows Jazz-Blues Fusion (Polydor, 1972).

With its insistent, elemental rhythm pattern and chord progression, "Can't Sleep This Night" demonstrates how Mayall remained steeped in his blues roots even as he altered his instrumental approach. The presence of his own harp playing, serviceable and then some because it's so passionate, is less important than the reality of the band immediately moving itself into an exploration of the changes. Clearly this Mayall line-up had all the dynamics of predecessors; they just rendered them at a markedly lower volume level.

As heartfelt as are these Mayall originals, the tunes are less important than the improvisation that takes place within them. On "So Hard To Share," as with "I'm Gonna Fight For You JB," (a homage to his own musical godfather), the vigorous input of saxophonist/flautist Johnny Almond is emblematic of the whole group's deep commitment to the music—and a healthy distance from its innovative likes as they tease Cream's "Sunshine Of Your Love."

Mayall was obviously not just leading a group of hired accompanists here and if Live at the Marquee 1969 proves anything it's the extent to which the man had developed the crucial leadership skill of a bandleader who could inspire dedication comparable to his own in those musicians with whom he worked. That allegiance elevates the otherwise slight likes of "Don't Waste My Time" and "The Laws Must Change"—the kind of topical work Mayall has always liked but fallen prey to preaching with—and turns "California" into the pinnacle of this band's work.

Appearing here in two versions (thankfully perhaps in place of yet another rendition of the showpiece "Room to Move"), this tour de force serves to exhibit the authority and imagination of electric bassist Steve Thompson, who wrote the tune. Thompson's playing underpins the muscular chording of guitarist Jon Mark, and the pair then engage in some delicate interplay that ultimately turns the two tracks into one elongated performance when Almond enters on flute and Mayall tosses in ideas from the periphery. Mayall had conceived this line-up as a contrast to the increasing self-indulgence of the blues scene and it's here that ambition reaches full fruition: none of these players show off their techniques or egos. 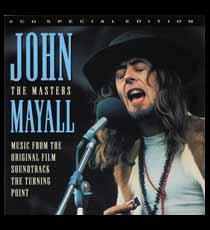 Live at The Marquee 1969 is released concurrently with a two-CD set titled The Masters, the first disc of which overlaps some of the content included on another double disc set The Turning Point Soundtrack (Eagle Records, 2004). It also shares some of the same archive material as a two-CD set released in 2004 along with a companion piece to the documentary The Godfather of The British Blues (Eagle Records, 2004). These sets, interesting as they may be to the Mayall fan, thus reveal little if anything that is new about this period in his career and, arguably, they may be considered redundant by definition give the existence of an expanded version of The Turning Point, itself a live recording from Bill Graham's Fillmore West.

The inclusion of interviews with Mayall himself, as well as Eric Clapton, Peter Green and bass guitarist John McVie (who left Mayall to form Fleetwood Mac in 1968) and British journalist Chris Welch (who writes informed and passionate liner notes as he usually does for such releases) also constitutes re-release of footage some of which appeared on the DVD: it is somewhat difficult to follow here as audio only, without visuals, even in those interludes of band rehearsal.

Proprietary ownerships and legal rights being what they are no doubt explains the reappearance of this material. To be sure, the most recent technology updates the quality of the recordings as originally captured some forty years ago, far before the digital age. It certainly behooves the artist himself to have such a crucial period of his history collected at a single source and the same goes for the fan who wants to readily avail himself of the content, in terms of its availability for purchase as well as of its collectible value.

There's the scholarly aspect of such titles too. It's to the credit of the Eagle label that the re-release aspects are revealed upfront, but it'd also be well to note, at least for the purposes of scholarship, the previous sources of this same material. After all, if you are as serious about this music as John Mayall, that sort of detail is essential and adds to the pleasure of the experience.

Tracks: Can't Sleep This Night; So Hard To Share; Don't Waste My Life; I'm Gonna Fight For You JB; The Laws Must Change; California (1); California (2).