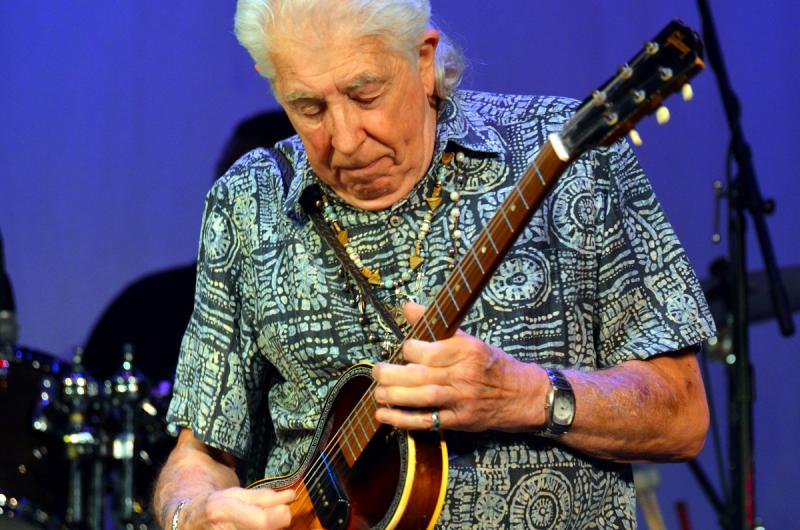 During John Mayall's long and storied career, the singer, songwriter, harmonica master, keyboardist and guitarist has used Chicago blues as the foundation for his signature sound, which also melds rock with a slight touch of jazz. His backing band is and has always been known as the Bluesbreakers. Membership in the Bluesbreakers has changed regularly since the late '50s when Mayall formed the group. This very special group's roster reads like a who's who of the English rock scene: Eric Clapton and Jack Bruce (who went on to form Cream), Peter Green, John McVie and Mick Fleetwood (who formed the nucleus of the original Fleetwood Mac) and Mick Taylor (who spent five years as a member of the The Rolling Stones) all spent significant time as members of the Bluesbreakers. Each became stars.

At 81 years old, the British bluesman plays with a fire and enthusiasm that musicians half his age only wish they could muster. His live performances are legendary. On a warm Friday evening in mid-September in the tiny Long Island town of Bay Shore, Mayall's performance was exactly as billed: intense, dynamic and flawless. In short, legendary. His voice was strong, full and pitch perfect. His phrasing was exemplary. His fingers were nimble as they danced across his keyboard and up and down the neck and fret board of his guitar. His proficiency for playing keyboard with his right hand and the harp with his left while singing between passages was truly mind-blowing.

The current lineup of the Bluesbreakers features Rocky Athas (guitar), Greg Rzab (bass), and Jay Davenport (drums). They played with aplomb and functioned smoothly along with Mayall, working together like a well-oiled machine. Before the first song Mayall addressed the theater's packed audience. He said, "Thank you for coming out tonight. We're going to play some old songs and some new ones. We're going to start off with "Congo Square." The Sonny Landreth-penned song immediately loosened the crowd and had its members tapping their feet and dancing in their seats. Mayall and the band proceeded with "The Sum of Something," a song from Tough (Eagle Records, 2009) during which Athas and then Rzab took center stage, soloing followed by a tasty interlude that culminated in a call-and-response interaction between Davenport's drums and Mayall's keyboards. Louis Jordan's "Early In the Morning" followed. Mayall characterized it as "a nice little rocker; it comes from the '40s."

Mayall grabbed his harp and resumed his remarkable set list with the Sonny Boy Williamson II tune "Help Me Baby." It was now time for newly released songs. Announcing that, "This is on the latest album (A Special Life released on Forty Below Records earlier in 2014). It's a new version of "Heartache" that was on my first album in 1964, John Mayall Plays John Mayall (Decca Records). Mayall and his band's performance of the plaintive song was nothing less than superb. Mayall then grabbed his guitar and led the band through "Like a Fool," another track from A Special Life, which he noted "was written by Rocky and Greg." Next up was another new song, the Jimmy Rogers composition "That's All Right" which was augmented by the audience clapping along in unison to the beat of the music.

Mayall again addressed the crowd, explaining that "Blues For the Lost Days" was about the early days when he was in England and struggling. "Not that we don't have any struggles anymore!," he exclaimed. The version of the song that followed featured Mayall and Athas trading scorching guitar licks. Mayall finished the set with "Mail Order Mystics" from 1993's Wake Up Call album (Silverstone Records) from the classic 1966 Blues Breakers album with Eric Clapton. The song featured Athas' great lead guitar, inspired bass and keyboard interplay from Rzab and Mayall, who subsequently left the keyboard and picked up his guitar to continue his jam with Rzab. Not to be left out, Davenport provided a highly syncopated drum solo while Mayall and the other musicians stood off to the side admiring the drummer. After the big finale, Mayall and his cohorts took their bows, thanked the audience for coming and head off stage. After a few short minutes they returned and performed a stunning version of "The Bear" from the Blues From Laurel Canyon (Decca Records, 1968) album.

The multi-generational audience held a few Millennials, Generation Xers and many Baby Boomers who got a chance to take a trip back in time, harken back to the '60s and '70s and relive their youth. Audience members of all ages were given the rare opportunity to enjoy an awe-inspiring evening of rockin' tour de force blues that had absolutely no particular agenda (political or otherwise) other than to bring joy to the masses.