By JOHN KELMAN
January 3, 2015
Sign in to view read count 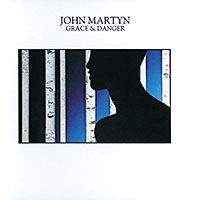 Martyn emerged, in the mid-'60s, as a singer/songwriter with surprising facility on guitar and a pure, emotive voice. At a time when bands like Fairport Convention were exploring the meeting place of rock attitude and British traditionalism, Martyn's early recordings, like his 1967 Island Records debut London Conversation, were steadfastly acoustic and in the folk tradition. But it wasn't long before he began to incorporate electric instruments and a more jazz-inflected vocal approach, his voice turning from the purity of his early albums to the more weathered singing on records like Bless the Weather (Island, 1971) and another enduring classic, Solid Air (Island, 1973).

A songwriter of rare autobiographical awareness and honesty, the Scottish-born Martyn also recorded two albums in 1970 with his wife, singer Beverley Martyn, but over the course of the decade leading up to Grace & Danger, increasing substance abuse and a seeming inability to give to his wife the emotional support that he clearly possessed based on his writing led to the two divorcing and what Martyn called "a very dark period in my life." In a BBC documentary that ran just a couple years before Martyn's utterly but, perhaps, inevitable passing just shy of his 60th birthday in 2009, his ex-wife remarked that "so much emotion left John through his songs that there wasn't much left for me," while narrator Phil Cunningham observed "Some people keep diaries; John makes records."

Grace & Danger stands as one of Martyn's most openly painful confessionals, with some of his most perfectly constructed songs and a more pop-like approach that raised his career to the next level with a flexible core group featuring keyboardist Tommy Eyre, bassist John Giblin and Genesis drummer Phil Collins (who also added backing vocals) capable of everything from the dub-like "Johnny Too Bad," harder-rocking title track, jazz-inflected "Looking On" and ambling "Our Love."

An album of near-cathartic qualities, as much for his fans as for Martyn himself, the songwriter's lyrics would never again be this sharp...or more self-aware: "Some people draw conclusions like curtains / Oh, don't they draw them tight" he writes on the captivating album-opener "Some People are Crazy," though in live performance he was known to dedicate the song to then-British Prime Minister Margaret Thatcher.

Elsewhere, the album's most fragile, heartbreaking "Hurt in Your a Heart" would be so hard for him to sing that 30 years later, in Cunningham's documentary, Martyn was still brought to tears performing it. Martyn says all the things that he sadly could not express to Beverley. They're so open, so honest, so utterly naked that they merit a complete look:

Darling, that's all that you have to do
Show me a sign
A word or a line
One stitch in time
To save this poor heart
From breaking.


You don't have to say it loud
I'll still feel the same
I'll still be true
Waiting for you
To come sailing through
Cos I you know you can.

Played with dark perfection, Martyn's echo-laden, swelling chords, supported by Eyre's atmospheric Fender Rhodes, Giblin's emotive fretless bass and Collins' restrained drum work, it's the song that gets the most repeat plays, despite there being not a single weak tune amongst the six Martyn originals, single cover ("Johnny Too Bad") and, most meaningfully, the closing "Our Love," co-written with his ex-wife, no doubt before the breakup.

In many ways Martyn's career peaked with Grace & Danger. While he would continue to make fine records and stretch beyond his early folk years into areas of pop and even trip hop, he would never again galvanize and express his emotions as openly, as honestly and with such absolutely vulnerability as he did with Grace & Danger, an album that, as timeless as its subject matter, remains as fresh today as it was when it was first released.